As an asylum seeker, it is not free of choice where to live. Asylum seekers have to stay in an asylum center, and Immigration Service decides which one. They can be moved from one center to another on short notice, and most asylum seekers will end up having stayed in many different centers. However, it is in some cases possible to apply for private accommodation with for instance family.

The centers are divided between different functions. Center Sandholm is reception center, and while the asylum case is pending, you are moved to one of the accommodation centers in Jutland. If you are rejected and not cooperating, you will be moved to the return- and deportation center Avnstrup (families) or one of the two deportation centers Sjælsmark or Kærshovedgård (singles people). Jelling is for people with special needs, and there are a few childrens centers only for unaccompanied minors. Finally, there is a risk of being detained in the closed prison Ellebæk as a "motivational measure" or in connection to a forced deportation.

The Danish Immigration Service pays for the operation of the centers and decides where an asylum seeker must stay. The Danish Red Cross runs about half of the centers on contract and a few municipalities are running the others centers. The Danish Prison and Probation Service runs the Departure Centers Sjælsmark and Kærshovedgård as well as the closed prison for asylum seekers, Ellebæk. See the list of asylum centers in Denmark. 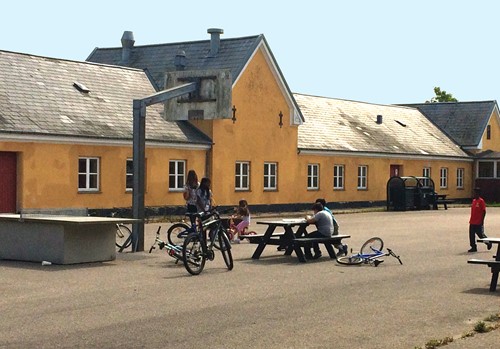 The number of asylum centers fluctuates constantly, depending on how many asylum seekers are arriving in Denmark. This leads to a great deal of relocations of asylum seekers and a constantly changing team of staff members. There is a big difference between the centers, both in terms of the residents, the physical conditions, and the ways the residents are dealt with by the staff.

The majority of the asylum centers are very isolated, usually put in abolished military barracks, training camps or sanatoriums. There is also a tendency that more centers are placed in Jutland and in thinly populated areas. This creates a great deal of frustration among the asylum seekers who do not receive adequate allowance to leave the centers. Because of the centers’ isolated locations, asylum seekers have a hard time meeting any Danish citizens, getting in touch with their family members, obtaining counseling with regard to their asylum case, and in general keeping themselves occupied. Fortunately, local Danes visit the asylum centers and offer company or activities to asylum seekers. Asylum seekers are free to come and go at will, but most centers have security control at the entrance for visitors – i.e. a visitor must be invited by a resident of the center to enter.

Most asylum seekers are single and they share a room with 3-4 other singles of same sex. Kitchens and bathrooms are located in the hallway and are often shared with 20 other residents. Families with children have two rooms and in a few centers a kitchen and a bathroom are included.

Asylum seekers have mandatory duties in the centers, such as cleaning of common areas. To some extent, an asylum seeker has access to language education in Danish or English and can apply for an internship if she/he is in Phase 2. Yet, in general it is difficult to find engaging activities and asylum seekers’ concerns about the future represent a constant struggle of their daily lives. It can also be difficult to live closely with people with different cultures and languages, and the majority of residents in asylum centers have traumas and problems to deal with. However, helpfulness and tolerance are usually more common than clashes and conflicts.

Read more in a researcher's article about the conflicting goals of the asylum centers. 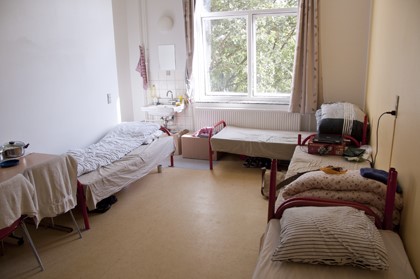 Kærshovedgård and Sjælsmark were deliberately established with very few activities, to put pressure on people to give up and go home. However, the main effect is that people go under ground or travel illegally to neighbour countries. In principle, you can stay forever in a deportation center if it's not possible to return you. Until the summer 2020 families also lived in Sjælsmark, but have been moved to Avnstrup due to politic pressure. Red Cross published a report in 2019 which documented how the stay in Sjælsmark was damaging to children.

Kærshovedgård is for single people, and is placed in a forest in Ikast-Brande municipality, 7 km from the nearest public transport, in a closed down prison. Sjælsmark is also for single people and lies 2 km from center Sandholm in Hørsholm municipality. In deportation centers there is electronic registration and a duty to stay overnight, and it's very hard to obtain permission to stay a few nights outside the centers. Several times a week you have to meet up with the police for "deportation control". The residents receive 0 DKR in cash and are not allowed to work.

Avnstrup has become a joint return- and deportation centre since the summer of 2020. All the families in phase 3 live here, both the families who coorperate and those who do not. Single people who coorperate live here as well. The center is run by Red Cross, who, among other things, offer activities for children living in the centre. In the beginning of 2021 new kitchens were etsbalished, allowing the residents to cook for themselves.Groceries can be ordered via an online system.

Reda more about the deportation centres in the new report "En fast hånd i ryggen" by Michala Clante Bendixen (in English from Sept. 2021).

Read the report 'Stop Killing us Slowly' from 2018 about the deportation centers by a group of academic researchers.

Sandholm and the deportation centers have a canteen for the residents who have to eat whatever is provided there three times a day and thus get no money for food. Most asylum seekers are frustrated about this practice and it can be particularly difficult for young children. The canteen only serves one dish, is open for 45 minutes only and it is not allowed to bring food to the rooms. In Sjælsmark it is not allowed to have a electric kettle or a fridge in the rooms.

Danish Red Cross has been put in charge for the care unit in Kærshovedgård and various offers in Sjælsmark, and are doing a good job. Yet, the assigment is somewhat pradoxical, as the Prison and Probation Service are told to make life as unbearable as possible for the residents at the same time. 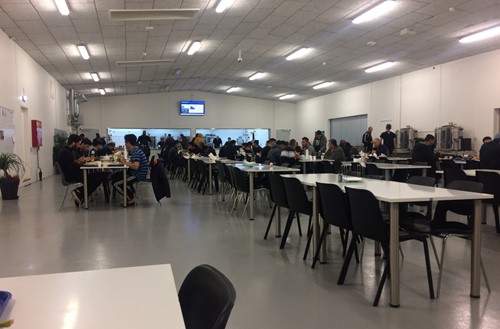 The canteen in deportation center Kærshovedgård

If you stay away from an appointment, ignore your duty to stay overnight in the center or simply refuse to leave the country after a rejection in your asylum case, you run a risk of being detained in the closed prison Ellebæk. And there you might remain for up to 18 months. The place is officially called "the insititution Ellebæk", but it is run by the Prison and Pobation Service and the conditions are worse and sanctions harder than the toughest prisons for criminals. Se the article and program from inside Ellebæk made by TV2 in 2019 here (in Danish).

The police is by law allowed to detain any asylum seeker, either as a "motivational measure" or on unspecific suspicion that the person might go under ground. Every 4 weeks the detained person is presented via video link to a judge and an appointed lawyer – but almost all of these sessions end up with an extension of the detention. In spite of a ruling from the Danish Supreme Court, saying that inmates in Ellebæk have the right to keep their mobile phones as they are not criminals, practice remains that you get a week in solitary confinement for being caught with a mobile phone. Some experts on law find the whole concept of imprisoning people on these grounds to be in breech of article 5 in The European Convention on Human Rights.

European Council's anti-torture committe published a report in January 2020 with an unusually sharp criticism of the two closed detention centers for migrants, Ellebæk and Nykøbing Falster Arrest. The committe found the two places unfit for humans in their present form. The committe also states that if we find it necessary to lock people up who have committed no crimes, the conditions must be as normal and free as possible – not worse than prisons for sentenced criminals.

Amnesty International's Danish medical group documented in a report (in Danish) back in 2013 that torture survivors, pregnant women and mentally ill people are being held in Ellebæk. Activists have documented that the inmates during weeks have not been allowed to contact their lawyers, and often in vain ask for a meeting with a doctor.