Since the ‘interpreters’ package’ was passed in 2013, only 8 of 151 Afghan interpreters have been granted asylum in Denmark. REFUGEES.DK publishes a complete overview and timeline of the issue, including Rajwa’s case.

- Since the pullout from Afghanistan, all major Danish newspapers and TV-stations have dealt with the Afghan interpreters.

- In a survey made by Rambøll for the Danish newspaper Jyllands-Posten in March 2013, 70,7 pct. of the Danes were ready to offer asylum to Afghan interpreters.

- Subsequently, the agreement has been heavily criticized. It has been pointed out that it has taken too long to find said interpreters, and that when they finally succeeded, only very few got through the eye of the needle: Only 8 interpreters of the 151 who sought help, have to this date (June 2015) been granted asylum due to this agreement.

- Furthermore, it turns out that all those who have been denied asylum by the Danish Immigration Service, is subsequently granted asylum by The Refugee Board. However, this option is only available to those interpreters who have either been granted a visa by the Task Force or managed to travel to Denmark on their own by paying huge sums to people smugglers.

- Recently, several hundred Danish veterans from Afghanistan have signed an open letter to the Danish parliament, demanding that the abandoned interpreters be taken out of harm’s way. A number of politicians support a re-negotiation of the package. 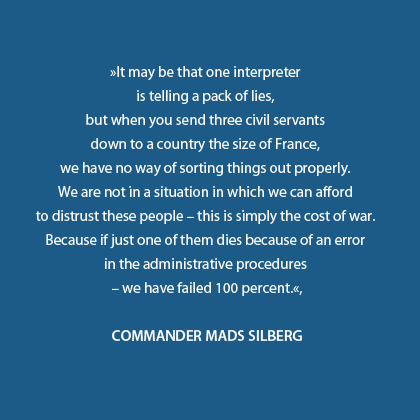 October, 7th, 2001: US invades Afghanistan, a coalition of forces, including Denmark, joins in. A number of local, Afghan interpreters assist the military units and are subsequently employed by Danish forces.

March, 2013: Minister of Defense, Nick Hækkerup (S), tells newspaper Jyllands-Posten, that he has heard of Afghan interpreters being harmed.

April 2nd, 2013: Chief of Defense Denmark delivers a report to the Danish parliament where it is stated that the Danish forces have been employing at least 195 interpreters since 2008. 37 of these were hired through the American company, Mission Essential Personnel (MEP). It also emerges that the forces have long been aware of the fact that these interpreters faced threats by the Taliban. However, this information had not been mentioned by Minister of Defense, Nick Hækkerup, when debating the Afghan interpreters.

May 22nd, 2013: The so-called ‘interpreters package’ is passed by the Social Democrats, the Social-Liberal Party, the Socialist People's Party , ‘Venstre’ (the liberal party), the Liberal Alliance and the Conservatives. At this point, Minster of Defense, Nick Hækkerup (S), says:

"None of the roughly 200 Afghan interpreters who have been employed by Danish forces since 2008 will be abandoned … We are now establishing a situation to ensure that that we never abandon our interpreters. We will take care of them and this will be made possible through a wide range of options.”

The package makes it possible for Afghan interpreters to seek help locally or apply for asylum in Denmark, if a number of criteria are met.

Read the agreement in English here.

The agreement has been made in cooperation with the UK. In the UK, 77.583 people signed a demand that Afghan interpreters be granted asylum, and the agreement faces criticism for being too restrictive and excluding too many interpreters, one of the reasons being the cut-off dates.

Read about the case in The Guardian (English)

August 2nd, 2013: Jyllands-Posten publishes an article about Afghan interpreters who have yet to receive the help they have been promised.

August 6th, 2013: Minister of Defense, Nick Hækkerup (S), states that 17 of the 195 interpreters employed by Danish forces have applied for asylum. This number is satisfactory, he says.

August 19th, 2013: The newspaper Information claims in an article that the Chief of Defense have only written three e-mails and made one phone call to MEP regarding crucial information on the 37 Afghan interpreters. The new Minister of Defense, Nicolai Wammen (S) states that he will meet with the Director of MEP in the US in order to solve the problem.

March 4th, 2014: 104 people have gotten in touch with the Defense Command’s so-called point of contact in Kabul, applying for asylum in Denmark, states the Chief of Defense.

December, 2014: Danish Institute for International Studies publishes a report, indicating that many elements are open to criticism and that only 6 interpreters haven been granted asylum. 42 have been denied.

December 27th, 2014: An Afghan interpreter tells the newspaper Information that his life is threatened. The interpreter has been denied asylum in Denmark, since he wasn’t employed at December 19th, 2012, as required by the Interpreter’s agreement. In January, however, he is called in for another interview with the Task Force, but later, his request is denied once more.

January 11th, 2015: Afghan interpreter Aman comes forward in Politiken and calls for help from the Danish government. He says his life is being threatened and objects to the fact that there is nowhere to file a complaint over the dismissal to his request for asylum. His criticism is backed by several experts and organizations.

February 5th, 2015: Afghan interpreter Aman is yet again being threatened by the Taliban and recounts how he is being rejected by Danish authorities.

April 16th, 2015: Amnesty International and Refugees Welcome send an open letter to the Minister of Defense and to the spokespeople on Defense, encouraging them to renegotiate the agreement.

May 6th, 2015: Two interpreters who have been employed by the British forces are granted permission to conduct a case against the British Chief of Defense regarding the discrimination of Iraqi and Afghan interpreters.

May 11th, 2015: Aman’s request for a visa to Denmark is denied, since the Danish Police Intelligence are unable to guarantee that he doesn’t pose a threat to state security.

May 18th, 2015: A group of Danish war veterans from Afghanistan write an open letter to the government and within few days manage to gather several hundred signatures from Danish veterans.

May 20th, 2015: The newspaper Information publishes the interpreter Rajwa’s story on its front page.  It is his open letter that you can read exclusively here on REFUGEES.DK.

May 22th, 2015: A letter in the newspaper Information from a Danish veteran about his interpreter and friend, Niazi.

May 27th, 2015: Norway relaxes its demands in the Norwegian version of the interpreters’ agreement, due to political pressure. There are no longer any demands regarding the duration of employment. Employment only has to have taken place after 2006, and it is emphasized that this is “not a matter of asylum policy, but rather protection of military personnel.”

June, 2015: A number of politicians back the war veterans in the Danish election and promise to help the Afghan interpreters, among them Jakob Elleman-Jensen (V). Enhedslisten (the Red-Green Alliance), the Christian Democrats and the Conservatives support a revised agreement, and the same goes for the spokespeople from Venstre (the liberal party) and SF (the Socialist People’s Party). The Social Democrats still back the agreement, and the Danish People’s Party have continually said that the interpreters should remain in their country.

June 9th, 2015: The newspaper Politiken writes about the interpreter Mohibullah, who paid smugglers to travel to Denmark to apply for asylum. It is the same pattern as in previous cases: Dismissal from the Danish Immigration Service, but asylum granted through the Board of Refugees. Mohibullah’s story, according to Politiken, is similar to the stories from several of the interpreters who have been rejected by the Task Force in Kabul. 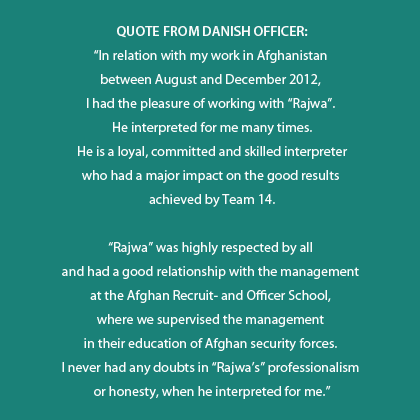 Spring 2013: Travels abroad, later back to his own province.

Aug. 2013: Kidnapped by robbers who take his cell phone with photos from the Danish camp and threaten to notify the Taliban.

Sep. 2013-Aug. 2014: 4 interviews with the Danish Task Force in Kabul. Rajwa writes several e-mails, and during this time, the family receives a number of threats because of Rajwa. Rajwa continues to have his request for entry visa denied.

January, 2015: Moves to Kabul, continues to hide indoors, tries in vain to find a safe place to work.

April-May 2015: Travels to India and wants to continue to Europe, but has to give up and return to his own province in spite of the threats, since here can live for free with his family.

NOTE: In October 2015 Rajwa had his American SIV visa issued. At this time, he was lucky to be in Kabul again, living off support from friends abroad, while his village was taken over by the Taliban. He is now going to start a new life in USA.