Gratitude is still overshadowing everything else for 26-year-old Rooyeen Atefi. He was among the first persons who moved into the newly established tent camp at the former military barracks in Næstved, Denmark, in January this year. The yellow tents have room for 400 asylum seekers. So far, they are housing about 90 single men, primarily from Syria, Afghanistan, Iraq, Iran and Eritrea. The men are waiting for the authorities in Denmark to try their asylum application. Rooyeen has a bachelor degree in social science, and like many of the other residents he is impatient to get work and contribute to society. The days in the camp are long, due to the limited possibilities for living a normal life here.

The strong wind makes the tent canvas flap and pulls at the bare trees. Rooyeen pushes the tent canvas aside and takes off his shoes before he enters the heated tent, which has been home for him and 7 other Afghans for nearly two months. The 8 mattresses are separated two and two, by one and a half meter high chip boards, to give the residents a minimum of privacy. There is a small Danish flag hanging above Rooyeens bed. He got it from an elderly woman who, together with her grandchild and other Danes from the village, came to welcome the asylum seekers when they first arrived, on a cold winter day in January. Rooyeen sits down on the neighbour’s bed and says with a happy smile that since his first day in Denmark, he has felt welcome.

“I’ll never forget the woman and the other Danes, standing there freezing in the snow to welcome us. The staff is kind, we get food, and the tents are warm. When we walk down the streets, the Danes are smiling at us and says hello. People from the village are bringing clothes and other stuff, which the staff distributes. Even the police at the border was speaking kindly to us” Rooyeen remembers and continues:
“Denmark is doing a lot for us. But of course I hope that I will soon be moved to a real centre with walls and a roof. The tents are okay, they keep us warm, but they don’t keep the noise out. It’s difficult to sleep at night. We can hear everything. That’s the worst, but as an asylum seeker, I have no choice. I have to be patient." 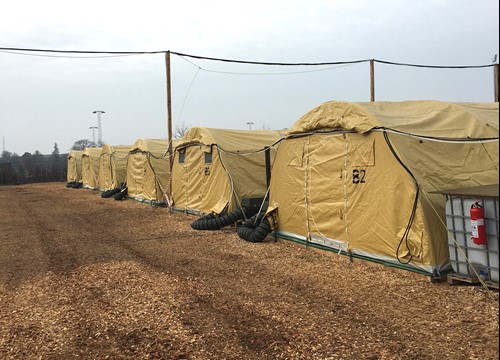 He grew up in one of the larger cities in Afghanistan, as the third eldest son in a family of 8 brothers and sisters. His father worked for the government and was a respected man in town.  “My dad was a peace-loving man who refused to carry a weapon. He always said that he didn't have any enemies. But when the government was overthrown, he and many others were imprisoned. When he got out, my mother could barely recognise him,” Rooyeen continues.

“My country has been facing war for 35 years. When I was a kid, the walls of our house were full of holes from gunshots. As kids, we took out the bullets and played with them. There were always armed men in the streets, and they could start shooting at any moment. That was something we learned to live with. When we heard shooting, we knew that we should hurry home. When Taleban got into power in the middle of the 90’s, many schools were closed. My dad found a job for me in a workshop where we fixed punctured car tyres. I worked there for two years before I was allowed to go to school again."

Last year, a remarkably higher amount of Afghans applied for asylum in Denmark compared to the previous years. Rooyeen explains that since the present government in Afghanistan came to power in 2014, the security situation has deteriorated dramatically. Taleban is marching forth and has taken over large areas.

The 26-year-old Afghan has a bachelor degree from an Indian university and has worked for international companies in Afghanistan. Before his flight he worked at a government office. He fled because he was sought out and threatened by Taleban.
“Late one evening, two armed men knocked on our door and asked for me. When my mom told them I wasn’t home, they left. My sister hid me in her house. Some days later they returned and searched our house. They tried to force my dad to tell them where I was. They demanded that I should give up my job, and work for them instead.”

The family knew the men were serious and decided to raise money for a smuggler, who could get their son to Europe.
“We had heard that there is peace and stability in the Scandinavian countries. Here politicians aren’t corrupt. My mother sold her jewels. My brother-in-law borrowed money from a friend. In our family we help each other, that’s how we are raised. The most dangerous route through the desert was the cheapest, but my father said no. He wanted me to go a safer way, even though it was more expensive.” 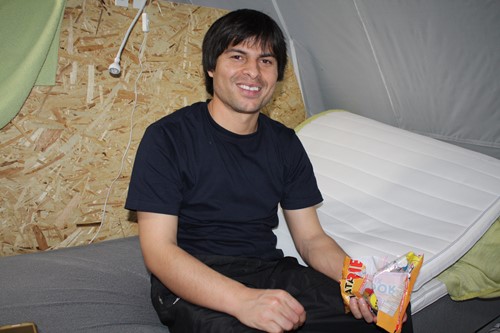 The rain is drumming on the tent canvas, while Rooyeen in detail describes the flight, which lasted for two weeks. Several times it almost went wrong, as for instance the night when he had to cross the border between Iran and Turkey in a mountain area controlled by local mafia. Or the night when he sailed from Turkey in a rubber dinghy with 30 other refugees on the way to Greece.
“There were patrols and border police all over. We were too many and had to throw our bags overboard. We prayed to God for protection. It was a miracle that we didn’t get caught. When we reached land and were standing there at the beach, we saw the sunrise. I’ll never forget that moment. We all thanked God."

The onwards journey was with a ferry, train and bus through Macedonia, Croatia, Slovenia, Austria and Germany. On the way, the refugees were gathering in larger groups. The single men helped families with kids. Rooyeen explains how they often had to wait for several hours at borders, in windy and cold weather. At the Danish border, Rooyeen was detained by the police and transferred to the arrival-centre north of Copenhagen, where he was registered as asylum seeker. Five days later he was transferred to the camp in Næstved.

Nobody had told the asylum seekers that they would be living in tents, but Rooyeen doesn’t complain.
“I fled to save my life. No matter what, I can’t go back. Taleban is everywhere. They can find me in a couple of days. I’m very worried about my family. I’ve always been used to putting my family first. Now I can’t help them. Here in Denmark I’m willing to take any kind of job. Everything is better than to sit here and do nothing. When I have learned the Danish language, I hope I can keep studying and get a master degree.”

Two days a week, the residents are transported to school, where they are taught Danish and social science 10 hours a week. Rooyeen has just confirmed that he wants to participate in an extra course about Danish culture. He does work-out in the local gym but the interest is huge; the centre has established quotas and therefore only 5 occupants can go each time. “It’s quite alright and much better than nothing. I’ve been a football player and I'm used to using my body,” he says and smiles.

Like almost all Afghans, Rooyeen is a Muslim and emphasizes that he respects all religions. “Religion is something private, it’s about my relationship to God. While I was studying in India, I also had Christian friends. I like that Christianity is an unprejudiced religion without violence. Of course I will follow Danish rules in Denmark."

Praying has always been a natural part of life for the young Afghan. Even though it is difficult to find peace in the camp, he tries to pray often. “When I pray, I feel better. Something happens mentally. There are some things in life I can’t change, I have to accept these things. The prayers give me peace of mind. I know I’m not alone. I survived the flight. I don’t know the future, but God will help me.”

The interview was done in March 2016. Photos: the author + Ditte Schwarz Gudmundsson. 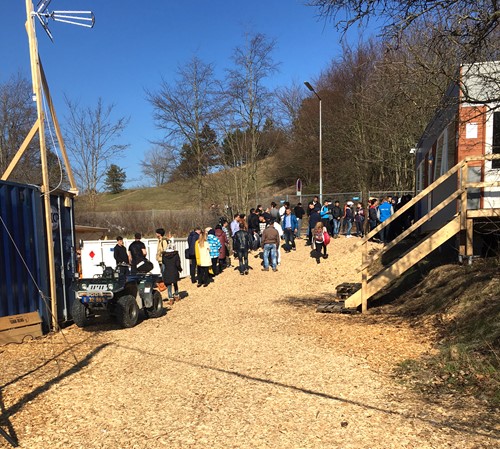