Photographer Martin Lehmann from the Danish newspaper Politiken, who took the photo above, was arrested shortly after.

Late last summer, a large group of refugees that had arrived in Denmark by train or ferry was detained at the border. After three days the Danish Police gave up the registration and these migrants began walking along the highway from Rødby toward Sweden. In this way, the so-called refugee crisis had reached Denmark – or at least that was how the media described it. However, it was quickly revealed that the majority of the refugees were not interested in staying in Denmark. They wanted to make asylum claims on Swedish soil. All of a sudden, the refugee debate in Denmark was inverted from a situation where refugees were perceived to be fleeing to Denmark to one where refugees apparently had no desire to be in Denmark at all.

By the end of September, the Danish Police estimated that in 20 days 16,000 refugees had arrived to Denmark, with the majority continuing their journey to Sweden.

In the days following these events, the Danish media were full of images with refugees walking alongside highways. The refugee crisis came close and was very concrete, and in response, many Danish residents showed a notable will to try and assist these refugees in various ways. The sight of exhausted refugees walking with their children on their shoulders without anything except the clothes they were wearing prompted many Danish residents to collect food, clothes, and other necessities and drive south to the border.

Some Danish residents took it a step further and gave refugees a lift. As a result, 297 Danish residents have been charged with human trafficking. They are charged according to the Danish Alien Act §59 section 8 (link in Danish), which states that it is a criminal offence to assist an alien with traveling into or through the country or assist an alien with an unlawful stay in the country. Therefore, these people risk being fined or even imprisoned for up to two years. 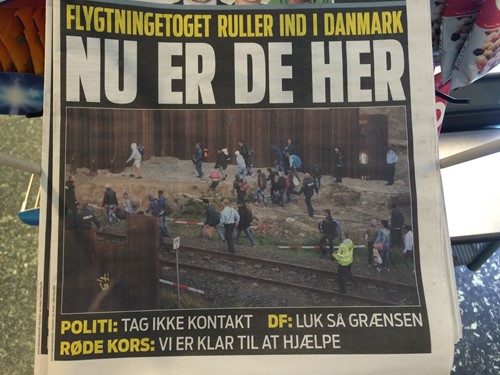 The creation of the 'humane trafficker'

What made ordinary citizens assist people whom they had never met before? Why were so many all of a sudden willing to break the law in order to assist refugees? Were these people even aware of the risks they were taking in doing so? In the Danish media, many of those who provided assistance to the refugees have expressed that they knew the actions were in principle illegal, but on the other hand, the Danish Police was just watching and letting things happen. One of the convicted even contacted the police but could not get a clear answer whether it was illegal or not. Indeed, the number of charges and the amount of the fines, has probably been a surprise to many of those charged.

For most people it was just a question of offering immediate humanitarian assistance. Those who assisted felt a sense of empathy and solidarity with these people who were fleeing war and persecution and were longing to be reunited with their families. As such, helping the refugees was an opportunity to show one’s humanity through concrete actions rather than just remaining a passive spectator watching the news.

However, there was also a political angle to it all. To transport refugees became a way for some Danish residents to show their discontent with the Danish government’s active efforts to deter refugees from coming to Denmark, for example through the controversial advertisements taken out in Lebanese newspapers by the Danish Minister of Integration. When the refugees walked along the Danish highways, the Danish government appeared incapable of making a decision and it became individual police officers’ responsibility to handle the situation as they saw fit. In this sense, Danish residents were attempting to fill the gap that a lack of political leadership had created. Through their humanitarian actions, these residents became political actors.

Meanwhile and in the aftermath of this event, the number of Danish residents volunteering in the asylum centers, municipalities and organizations has increased tremendously. Many initiatives in support of refugees have been launched, both on a political level and offering assistance with the process of integration.

Out of the 297 people charged, only a few cases have yet been ruled on. The most discussed case concerns Lisbeth Zornig and her husband who recently were each fined 22,500 DKR. Lisbeth transported six refugees in her car and her husband gave them food and shelter for a short period in the couple’s house before they continued on their journey. This case, among others, was discussed in the British newspaper The Independent. A 70 year old retired woman from Lolland was fined 12,500 DKR for giving a family a ride from Rødby harbor to Malmø. A young man from Randers was given a 7,000 DKR fine for assisting refugees with buying a train ticket. The amount of the fines for the retired woman and the young man were lower due to their financial situation.

Some people are facing more serious consequences than the economical punishment. Several of the people charged do not hold Danish citizenship and in worst case scenario they risk being prevented from ever obtaining this or possibly even being expelled from the country. One of them came to Denmark as a refugee when she was 5 years old. She could therefore identify easily with the refugees. Even if her actions will have major consequences for her life, she does not regret them.

The large number of people charged and the sentences given to those convicted so far has shocked many people. It has led to demonstrations and collection of money to cover the fines. One group, called With-The-Human-Traffickers (Medmenneskesmuglerne) has organized resistance and acknowledged that they assist refugees through countries and across borders. They argue that only an unjust system will prosecute those who assist people in need and it is, on the contrary, a humane and moral obligation. Calle Vangstrup who is part of With-The-Human-Traffickers has chosen to be open about his actions. In the fall, he smuggled refugees on his boat to Sweden several times and he is already charged. Yet, he disagrees so much with the law that he feels forced to break it.

The rulings on these cases seem harsher when compared to earlier cases where people have assisted foreigners without legal residence. Refugees Welcome, a Danish organisation which offers free legal counseling to refugees, is aware of several cases where people have unlawfully housed family members after a rejection on their family reunification application but have not been charged. Two years ago, the organisation assisted an older woman with getting a residence permit. For several years, this woman had lived unlawfully with her daughter who had residency in Denmark, but this had no legal consequences for the daughter. In recent years, the number of people being charged with human trafficking has increased considerably. Apart from the cases from September these cases typically concern ‘real’ human trafficking, i.e. the organized trade of women for prostitution and of men in slave-like labor conditions as well as cases involving the issuing of false passports and identities sold for large sums of money. Last October, for instance, two men and a woman were convicted for having trafficked 43 people to Denmark for a large profit. They were sentenced to 2 ½ years of imprisonment and expulsion forever.

While ordinary Danish residents are charged for assisting a few refugees, DSB (Danish Railroads), which transported thousands of refugees, was let off. In the hectic days in the fall, DSB suspended ticket control of refugees and allowed them to travel for free. This has not had any legal consequences for the company. Nor has the comprehensive civil effort that took place at Copenhagen Central station (later taken over by Danish Red Cross) led to any charges. For months, volunteers distributed food, good advice, and bought tickets to refugees who wanted to continue their journey.

Another important aspect of the case is that the Danish Police in practice granted safe passage. Both before and after September 2015, the Danish Police has operated according to the Dublin-regulations and forced everyone traveling unlawfully to Denmark to give their fingerprints and seek asylum in Denmark. Yet, during the period in September when large numbers of refugees arrived, the Danish Police officers passively watched as private individuals stepped in to provide forms of assistance. Indeed, those who did not want to seek asylum in Denmark were allowed to continue their travel without registration or interdiction. Many people read the Danish Police’s behavior surrounding these events as a tacit endorsement of their assistance. The Swedish government critiqued Denmark for acting against the normal procedure; Denmark that otherwise was always a strong supporter of the Dublin-regulation.

The Danish Police explained their decision with the fact that it was not possible for them to put several hundred refugees in front of a judge within 72 hours if they refused to have their fingerprints taken. The politicians focused on keeping the refugees away from Denmark, but once the refugees arrived in Denmark, a situation of confusion and chaos cropped up. 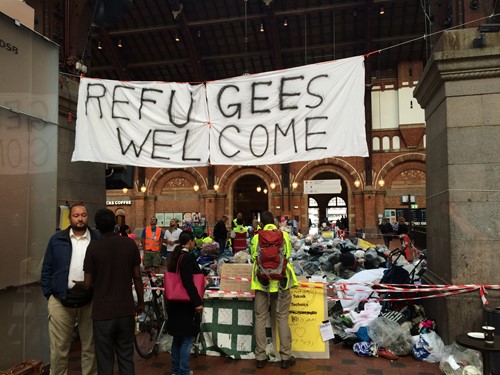 Part of a broader trend?

The criminalization of Danish residents who show solidarity with the refugees is not unique to Denmark but is part of a broader trend. Recently, the Greek Police charged two Danish volunteers from the group Team Humanity and three Spanish lifeguards from Proem-Aid with human smuggling. The five people tried to save boat with refugees at Lesbos who were downing. Now they can be facing up to 10 years of imprisonment. Previously, the European Union has put forward a bill that criminalizes volunteers who assist refugees on the Greek islands, and after the  EU-Turkey agreement the volunteers are no longer given access to the camps, which have now become prisons. This development is worrying because criminalization of people who act in solidarity and are motived by humanitarian reasons can deter citizens from getting involved with the reception of refugees.

Now 8 months after September 2015, the discussion about human trafficking in Denmark continues. We have the cynical and ruthless human smugglers who for profit exploit vulnerable people. His opposite is the humane human smuggler who acts in the name of solidarity and empathy. Yet, there is also the third version that is between the two: all the many people – from the desert of Sahara to the Turkey’s port cities – who merely see this as any other way to make some money, and as long as there are no legal ways to seek asylum, it is a necessity in order for refugees to get access to territories where they can get protection.