Way too long waiting time, confusing rules and uncertain futures are causing many to leave again

At the end of August last year, Asylum Centre Sandholm was filled with relieved and exhausted Afghans who had been evacuated under chaotic conditions. Most had previously spent many hard days at the airports of Kabul and Islamabad, Pakistan.

Some were happy to have their entire family with them, others worried since they had to leave their loved ones behind. But everyone was hopeful, having escaped the Taliban's newly established regime and getting the chance for a new life in a free country. Some were well informed about Denmark and already had Danish friends, since they had worked at the embassy, for the Danish forces or for international organizations.

The evacuations took place over a few weeks, and finally closed down at the end of August 2021, never to be reopened. In total, just over 1,000 people came to Denmark, of which approximately 100 already held a residence permit. The remaining 907 people were accommodated in asylum centres. Around half were children and 60% of the adults were women.

The general understanding among the Afghans themselves as well as the Danish population was that now they would soon move into Danish municipalities and start their new lives here. But now, almost 6 months later, things look very different:

Status by February 7th 2022:
• 631 have received residence permit under the special law
– but only 245 of them have moved to a municipality so far
• 29 have been rejected, and nobody knows what will happen to them
• 438 have applied for asylum at the same time, but none have received an answer yet
• 48 cases have been closed with reference to “departure”
• for family reunification cases the process is only starting now

Khalil already moved out to his local municipality:
"I'm very grateful that we have been granted a permit to live here, but the waiting time was very tough. I have been working and studying all my life, and never felt so useless as here. In Kabul i had a job with a lot of responsibilities and many people under me, and I thought I can take any kind of work here, but now I feel tired and stressed. I studied Danish every single day for hours, but it's hard, and I'm not quite young anymore."

Initially, a broad political agreement was reached in a hurry on August 11th to bring Afghan collaborators to Denmark. The swift agreement only covered those who had been employed at the Danish embassy or in other ways had a direct connection to Denmark, and where the collaboration put them at immediate risk after the Taliban took power. They had to send an application via e-mail, documenting their identity and connection to Denmark. Employees of the UN, the EU and other international organizations were later included in the agreement.

However, when they arrived in Denmark, they were not given status as asylum seekers, nor did they have a visa or residence permit. They were simply "registered" and under the support of the Danish Immigration Service. It was not until several months later, on November 18th 2021, that the hastily treated special law entered into force – a law which had received many critical warnings during the consultation round, including from Refugees Welcome.

It simply seemed inexplicable why a special law was needed, which in many ways put this group at a disadvantage compared to "ordinary" asylum seekers, both in terms of rights and future prospects. According to the special law, the Afghan evacuees would not get refugee status, and they would only get 2 years of residence without the possibility of extension. The only apparent advantage was the prospect of a particularly fast case processing. 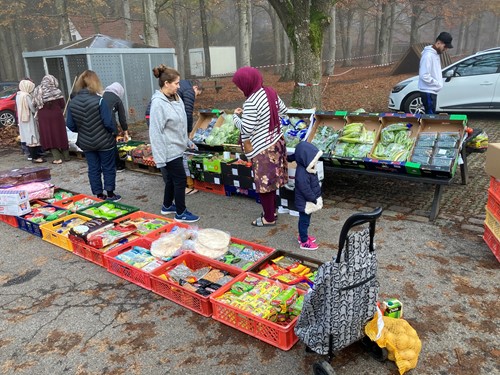 A local shop comes once a week to asylum centre Holstebro, where many Afghans are staying

Already when the special law was passed, the concern among the evacuated Afghans was great. They had an endless series of completely relevant questions, which they could not get clear answers to, despite the efforts from the Danish Immigration Service, the Danish Refugee Council and Refugees Welcome who all came out to the centres to talk to them. How long will it take until we can begin our lives in Denmark? How can I bring my wife and kids here? What about my 16 year-old little sister? Should we apply for asylum now, or rather wait until the 2 years have passed? What will happen if we are not granted asylum?

Others again had also applied to come to the United Kingdom or the United States, and some had even already been granted permission. Perhaps it would be better to go there? What were the pros and the cons? Some left after a rather short time – and by now the number has reached 48.

Hamid has been granted residence, but also holds a visa to the UK. He is in doubt whether he should leave:
"I really like Denmark and Danish people, they are so friendly. And I know that Denmark helps us a lot, to find a house, schools, to learn Danish – and education is free. But I don't know what to do after those 2 years. And I also think it would be much easier in a country where I already speak the language. So, I don't know, I keep thinking…"

The first 600 interviews were conducted fairly quickly by a team of employees at the Danish Immigration Service, appointed particularly for that group. But then it all came to a standstill. During a meeting in November 2021, the Danish Immigration Service promised that the vast majority of cases would be settled before Christmas, so that the Afghan evacuees could all move into the municipalities in January and February 2022. That did not happen. Instead, many of the Afghans were summoned for both two and three interviews, and the last ones will not move out until May.

Ordinary asylum cases can actually be settled faster than these cases have been. Even in a period with a large number of arrivals, a number of cases from Syria and Eritrea were settled within 4 months. The two most time consuming parts of asylum case processing are determination of the person's identity and assessing the personal asylum motive. Therefore, it was expected that the evacuated Afghans could have gone through the procedure in only a few months: they had a designated group of special caseworkers, they were more or less identified in advance and according to the special law, they did not need an asylum motive to be covered. ID, hiring documents and recommendations should have been sufficient.

Waiting time is mentally straining and can be psychologically damaging. For this group, it also took them by surprise that they had to sit passively in an asylum centre, wasting their time for more than half a year. After all, they were told processing would be fast and that they would not be treated as ordinary asylum seekers. But the wait was even worse, because of the family members who had to be left behind in Afghanistan during the chaotic evacuation. They were now in great danger.

Those who wait in Denmark cannot even submit an application before they themselves receive a residence permit. They were first referred to a simple contact form on a website, and a special online application has now been created, but only for close family members – and it is not possible to apply until the evacuee in Denmark has obtained a residence permit. The average waiting time for family reunification is approximately 10 months after one has been granted residence and submitted the application. Thus, the families will likely end up being separated for a year and a half.

Jawad had to leave his wife and a young son behind, and still didn't get an answer:
"I can't wait anymore without my family, it's not possible. The other day, two people attacked my son right outside our house. He got 12 stitches on his cheek in the hospital afterwards. I think I will go back now, though I know it's very dangerous. I go crazy here, waiting… and they tell me it will take many months before my family can come. But we never get a straight answer from them, it's so frustrating. I will wait one more week, then I decide."

When the special law was passed, it dawned on the evacuees that they would only be granted residence for 2 years – with no possibility of extension. And then what? The Taliban will not have disappeared within 2 years? And if you return from Europe, you are even more in danger. And why even trouble yourself with learning Danish, finding work and so on, if you will not be allowed to stay? The answer from the government was that by then, the Afghans could just apply for asylum. However, there are two problems with that answer: firstly, it's far from certain that you will be granted asylum just because you are covered by the special law, and secondly, in that case you can wonder why it was necessary to conjure up a special law at all?

29 of the evacuees have already received a rejection under the special law, and it's highly uncertain what will happen to them. Recently, two other Afghans have been turned down by the Refugee Appeals Board, which means that some of the evacuees might up in the deportation camps, which will probably come as a surprise to many.

Most other Western countries that evacuated Afghans have offered them far better conditions and opportunities. Several countries have given them a normal house to stay in shortly after arrival, and they have been granted either permanent residence immediately or 5 years of residence with the option to extend. Besides, all other countries have much more lenient requirements for citizenship than Denmark.

Many of those who ended up in Denmark could just as well have come to other countries which they had also worked for at some point or because they were evacuated due to an international employment. So now they felt lured into a trap. The American embassy actually hung up posters in the Danish asylum centres and offered interpreters and others who had worked for the United States to apply for residence in the United States instead. In the future, more will probably leave Denmark in frustration.

We has previously published an article with good advice and information on the subject on this website.
Politiken has recently written about one of those who have decided to travel to UK, and most of the figures in this article come from there.

Support our work for the Afghans
by donating or becoming a member!