Compared to last year, same time, the numbers have dropped significantly. We asked an expert to explain this development.

FACTS:
Traditionally, the number of asylum applications in Denmark are rising during summer and autumn, partly due to the sailing conditions on the Mediterranean, but this year since February only around 100 have arrived per week, and the number is even going down. A sudden fall in the numbers occurred shortly after the Swedish border control was introduced in January. During the summer months of 2014 and 2015, the number was between 200 and 400 new arrivals – peaking in November 2015 with more than 1,000 a week. During all of July this year, only 346 came, which is the lowest number since 2011, and only a third of same month last year. The decrease in Sweden has been even more significant, from 8,000 in July last year to 2,200 July this year. Things are going in the opposite direction in Germany, where the numbers have doubled since last year. 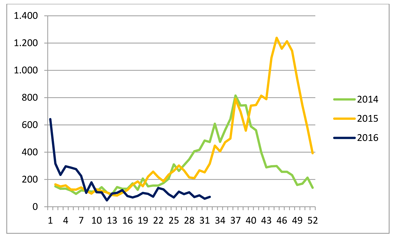 - This year’s tendency has indeed differed from several earlier years. Primarily, it seems that the attempts from the European countries, and their neighbor countries, to shut down the so-called Balkan route, have had an effect; specifically the Macedonian closing of the border which has led to thousands of stranded refugees in Greece. Another reason is the deal between Turkey and EU, though its consequences and perspectives are more uncertain. But by comparing the numbers of asylum seekers in Denmark with numbers from other countries in Northern Europe, it is confirmed that the tendency stretches beyond only Denmark or Sweden; also Norway, Finland, Belgium and Holland have experienced a similar decreasing in new arrivals – with Germany as an exception.

- However, these numbers must be interpreted with caution, as the general European policy, including the criminalization of people transporting refugees, has changed many of the flight routes and the dynamics, and thus complicates direct comparisons with earlier years. And rest assured, the numbers are still high: during the first quarter of 2016, 50% more refugees arrived in EU than during the same period last year. Of differences, we should note that the more or less state run Balkan route in 2015 was far more separated from smuggler networks than the traditional routes. This in turn meant that – besides being far safer than the current Libyan-Italian route – far more people sought to be registered by the authorities. By contrast, the attempts to close the route down has pushed people in the arms of the smugglers, and therefore there is no doubt that 2016 has seen a much larger number of refugees avoiding registration and documentation by authorities. At the same time, many refugees in Turkey and Lebanon are right now awaiting the situation of rising instability in Turkey, preparing themselves to travel quickly, so the numbers may change quickly.

Is there a direct connection between the Swedish border control and the decreasing numbers in Denmark?

- Certainly, during 2015, the Swedish and Danish governments had several clashes.  The Swedes criticized the Danish transit policy, which allowed tens of thousands to travel from Germany via Øresund to Sweden without being registered with fingerprints in Denmark. After the Danish government repeatedly refused to change its policy, the Swedes changed theirs in three steps; in November 2015, ID control was introduced on Øresund as a deterrent signal, targeting 40% of the flow. Since January 2016, the Swedish have demanded passport to enter, and the Danish government immediately followed up by controlling the German border. After a few days, the numbers had dropped radically, in both Denmark, Sweden and further north. Shortly after, the Swedish government reduced access to permanent residence permit, and, finally, in June 2016 a very drastic change in the right to family reunification and the rights for rejected asylum seekers was passed.

- To the extent that refugees have a choice to make about destinations at all, they indicate that things like security, education, social relations and family are important for them. The Swedish deterioration of the safe escape route that family reunification is, might indeed have influenced the transit. By implication this might also have affected the number of people travelling to and through Denmark. But there are other factors, which might also play a countering role here; on the regional level, the decrease in numbers in Denmark and Sweden are reflected by similar tendencies in, say, Holland and Belgium, which problematizes explanations of the falling numbers as being caused only by changed Danish or Swedish policies. Rather, the most influential factor, capable of explaining the overall European trends, is the development in Turkey, Greece and Macedonia .

Are fewer refugees arriving in Europe? Or are they just not able to come all the way to the North anymore?

- Generally, people are stuck further south. More specifically, there has been a decrease in EU since the record high of November 2015. But the total amount of asylum applications has still been high, around 100,000 per month since January 2016, which is almost 50% higher than same period last year. Hungary and Germany are seeing an increase in the asylum numbers, while Denmark, Holland, Austria, Finland, Sweden and Norway have very few new arrivals. Italy and France have stable, high numbers, but are below Germany . 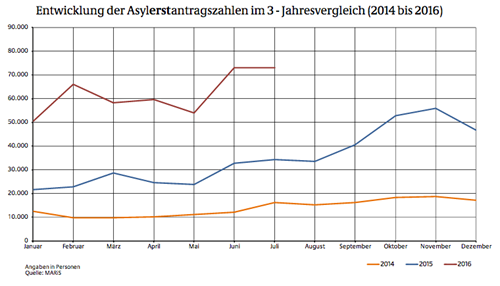 - Since the EU in the autumn of 2015 pushed Serbia, Bulgaria and Macedonia to introduce extended border control, Greece has turned into a 'dumping zone' for a border-induced displacement – at the moment, 57,000 people are forced to survive on in unacceptable camps around Greece, many without access to asylum procedures, food or medicine. The political instability and insecurity in Turkey is worrying on many levels, and for the 3 million Syrian refugees, the development could be fatal. Further down the route to Syria, refugee camps are increasingly being attacked and dragged into the conflict of IS, Russia and Turkey .

- But the militarisation of the route through Europe, which NATO and Frontex have been summoned to perform, is making conditions for asylum seekers and NGOs much worse; there are many cases of harassment from the police, and the Balkan route itself has partly been pushed into the hands of the mafia. The difference is mainly that the majority of the refugee flow in 2015 literally was followed by the camera lenses, while the current escape through Serbia, Bulgaria etc. has been forced under ground, into irregularity and crime. More and more information also point to a growing Egyptian-Italian route for boat refugees, supposed to be a safer alternative to the dangerous Libya-route. However, many also drown on this new route; 500 in April 2016 alone.

All Danish numbers are from Danish Immigration Service. Charts are taken from the official websites of the refugee authorities of the three countries.