The asylum procedure in Denmark 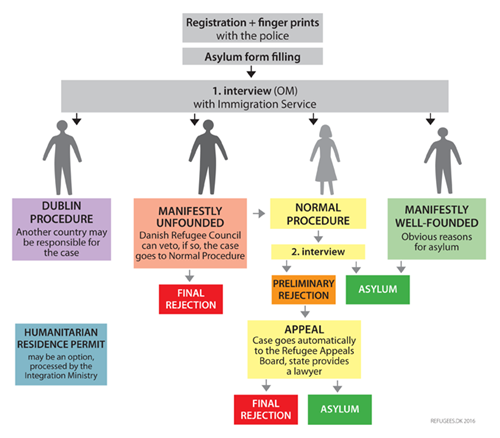 Most asylum seekers travel to Denmark on their own. The first step is to register at Center Sandholm in Allerød. The Return Agency will take photo and fingerprints of the asylum seeker, and he/she will be asked to state name, date of birth, and country of origin and to hand over any ID documents. An asylum seeker card will be issued immediately, which serves as her/his personal ID. After the registration, the asylum seeker will be accommodated by Danish Red Cross.

Refugees Welcome has a leaflet in 9 languages with good advice for asylum seekers.

Read more about how cases are processed in the report "Well-founded Fear - credibility and risk assessment in Danish asylum cases". 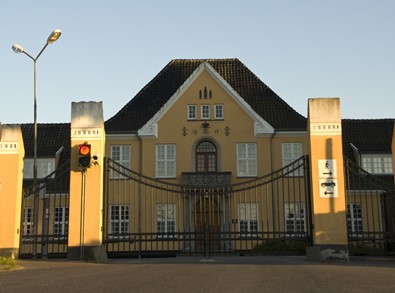 If the asylum seeker holds a visa, has close family members in EU, or her/his fingerprints have been registered by a country that is part of the Dublin Regulation, then the asylum seeker’s case will follow the Dublin procedure. Denmark will request the country that will take on the asylum case. The asylum seeker can file a complaint about the Danish Immigration Service’s ruling and the Danish Refugee Council (Dansk Flygtningehjælp) has a special office that can assist with these complaints. The Refugee Appeals Board (Flygtningenævnet) rule on complaint cases and the decision will very rarely be changed.

If the case is not considered a Dublin case, the asessment of the case will begin in Denmark. Now the asylum seeker is considered to be in phase 2 and will be moved to an accommodation center.

PHASE 2 (processing of the case):
• Move to accommodation center in Jutland
• Basic cash allowance (pocket money) + maybe money for self-catering (depending on the center)
• Internship + language education (Danish or English)

Manifestly Unfounded cases (ÅG or ÅGH). A case is determined to be manifestly unfounded if the asylum seeker’s country of origin hardly ever leads to asylum or if the asylum seeker’s grounds for seeking asylum are deemed to be patently weak or invalid. The asylum case is rejected without further consideration. The Danish Refugee Council can impose veto in all Manifestly Unfounded cases and will call the asylum seeker in for a meeting. Yet, in the majority of MU cases the Council agrees to the rejection and thus, the asylum case cannot be appealed to the Refugee Appeals Board (Flygtningenævnet). Asylum seekers whose case has been determined to be manifestly unfounded do not receive any cash allowance and are required to live at a center with a cafeteria.

Manifest Permission is a faster procedure for asylum seekers who are very likely to be granted asylum. The procedure often only requires one interview. Manifest permission cases are usually processed in a few months, depending on the general waiting time.

Most asylum cases go through the Normal procedure, which includes a second and maybe third interview with the Danish Immigration Service, taking place after a few months. In the second interview, the asylum seeker will be asked to elaborate on her/his answers provided in the first interview and there might be results from investigations initiated after the first interview.

If the ruling is a permit, the asylum seeker will be assigned to a municipality that holds the responsibility for overseeing the following 3 year integration period.

If the ruling is a rejection, the case will automatically be appealed to the Refugee Appeals Board. The asylum seeker will be appointed a lawyer after her/his own choice. The lawyer will summon the asylum seeker to a meeting and prepare the case. Usually, the board meeting will take place several months after the rejection and the asylum seeker will attend in person together with her/his lawyer and an interpreter.

The Refugee Appeals Board consists of 3 members: The board’s chair is a judge, the remaining members are appointed by the Ministry of Integration and the Council of the Danish Bar and Law Society. In practice, there are several boards working in tandem. In 2015, the board considered 1,481 cases and 21% of these rulings were reversed. Most of the rulings are unanimous. The board’s ruling is final and cannot be appealed. An asylum seeker whose case has been ruled on can apply to have her/his case reopened, but this will only happen if new important information has emerged after the ruling of the case – either in the form of personal circumstances, a change in the situation in the country of origin or a general change of practice in similar cases. See more under How is an asylum case determined?

PHASE 3 (if the asylum seeker has been rejected):
• Move to return center Avnstrup, and maybe later to departure center Sjælsmark or Kærshovedgård (run by the Danish Prison and Probation Service)
• No cash allowance (pocket money) or self catering
• No internship
• Risk of imprisonment in the Ellebæk Prison
• Daily reporting and regular meetings with the Return Agency.

Families with children used to have access to live in special housing accommodation outside the asylum center, if they had stayed several years in the asylum system, but this option was abolished in January 2016.