A comparison between the recognition rates for Afghans and Iraqis in the first half of 2015 shows that Denmark is totally out of line with our neighbouring countries Sweden, Germany and Norway, when it comes to assessing the need for protection for the two groups, whereas the differences are small when it comes to Eritreans and Syrians. 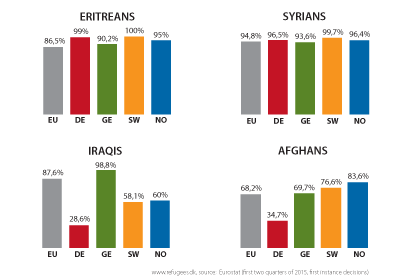 These are surprisingly big differences between four countries that have high standards on law and order and case handling. The example shows that a common asylum procedure for all of EU has to be established before distributing asylum seekers by quota deals among the member states. If it becomes random which country the refugee ends up in, the decisions have to be made by a central agency. At the same time more uniform rights concerning permanent residency, family reunifications and economic support should be in place.

The Dublin agreement is already a lottery regarding where an asylum application will be assessed, depending on where the applicant happens to get his fingerprints taken. The new distribution deal contains an even bigger arbitrariness, as it is possible to some extent to try avoiding getting your fingerprints taken.

A recent survey by Danish Radio shows that 49% of the Danes agree more or less that Denmark has a special responsibility towards refugees from conflicts that Denmark has been involved in – including the war against Taliban or Islamic State. This is a contrast to the decisions on Afghan and Iraqi asylum cases. However, these two things have nothing to do with each other. Asylum cases should not be influenced by political considerations or public opinion, but based on the applicant's credibility and personal story held up against background information on the home country from eg. UNHCR and the human rights organizations.

The number of Afghans has increased dramatically recently – more Afghans than Syrians are now applying for asylum in Norway and Sweden. In Norway 2,200 Afghans have arrived during the last 3 weeks and in Sweden more than 4,000 Afghans asked for asylum last week only.

Until now 563 Afghans have applied for asylum in Denmark this year, but in the first months of the year it was only 25-50 every month, and in September the number rose to 236. The number for October has not been published yet. Afghans have been the largest group of asylum seekers some year back, but until the rise this year the share has been decreasing.

Some experienced asylum lawyers are surprised at the high recognition rates in our neighbouring countries, and can not find any explanation for the big variations. The Danish authorities normally grants asylum to those who are concretely persecuted if they are found credible. This applies to for instance to applicants who have worked for the authorities (police, military, civil servants) and have been exposed to threats or abuse from Taliban. Besides, Christian converts and atheists can get asylum.

Those who are rejected at the moment are often private conflicts over marriage or land disputes. Their stories are quite identical and seem fabricated – maybe they come from the smugglers. But they are based on true stories, and it can be hard to tell the orginal form the copy. An often told story is a couple who say that the woman had been promised to a local commander but fell in love with another man, they entered into a forbidden relationship and had to run away when it was revealed, and now the commander threatens to kill them both. These stories are often dismissed as not credible and constructed.

An increasing share of the Afghan asylum seekers are unaccompanied minors – all of them boys. In 2014 only 61 of those came, equal to 19% of the total. During the first 9 months of 2015 the number is already 248, and half of these came in September alone, representing a share of 44%. Most of them will have their case assessed on the same terms as adults, but a few will get permit to stay because they have no family network to return to – however, this special permit expires when they turn 18. Only 156 permits were given to unaccompanied minors in total in 2014, and only 18 of these to Afghans.

The number of Iraqi asylum seekers in Europe is also rising. In Denmark, 151 Iraqis applied for asylum last year, and this year 504 are already registered.

Over the years, Iraqis have likewise encountered very different levels of protection in Europe. In 2008 the percentage spread from 0% in Greece to 100% in Finland, and back then Denmark was at 46%. Only a few years earlier, in 2006, it was only 2% of Iraqis in Denmark who were granted asylum. Between 2006 and 2008 the recognition rate was sharply rising in Denmark and Germany, but during the same period falling sharply in Sweden – from 90% to 42%. See the statistics from Danish Refugee Council 2008 here.

Last year the recognition rate for Iraqis was 11%, and this year so far 28%. Those who come from IS-controlled areas will typically get asylum, but the general violence in Iraq is not sufficient. Christian Iraqis have had a better chance of getting asylum after 2008.

Among the Iraqis, unaccompanied minors do not form a large part, and the big difference between the assessments can therefore not be explained by an easier access for them.