With the stroke of a pen, 21,000 people will have their incomes – which are already at a minimum – cut in half

All refugees who arrived to their local municipality since September last year, have been granted the new payment, which is the equivalent of 50% of the lowest unemployment assistance benefit. From July 1st, this new lower payment will extend to everyone who has stayed less than 7 years legally in Denmark, during the last 8 years. Over half of them are children who will end up living below the poverty line. As early as 2017, the total number receiving this payment is expected to reach 40,900, of whom 21,800 are children (link to government note in Danish).

According to the Ministry of Employment, the average rent (excluding utilities) for a family is 6,138 kroner/month. The surplus after tax and rent is therefore 7,420 kroner/month for a family of five.

In connection with the establishment of the poverty line, which the government has now scrapped, an expert committee found that a couple with three children must have 13,122 kroner/month in disposable income, once rent and tax have been paid, in order to maintain an ‘acceptable standard of living’.

During discussions concerning the implementation of the recent capping of unemployment benefits for all residents in Denmark, the Minister for Employment, Jørn Neerdaard Larsen (V) stated that, “…This means, that a typical family with three children will from now on have ca. 15,000 kroner disposable income a month, once tax and rent have been paid. This is not a huge amount, and will require a sharp prioritisation in order to keep their budgets within their limits, but it can be done” Here, the Minister is talking about a sum that is double the amount of what a refugee family has.

In reality, many refugee families will have a higher rent than the average, because the price per square meter is much higher in the Copenhagen region and in certain other local districts. Refugees cannot decide themselves, which district they will live in, and they most often live in apartments, which the local council has assigned to them. The local council can choose to pay a subsidy to the rent, but this will also be hit by the new unemployment benefit cap, which also contains a limit for how much rent may be subsidised through housing benefits and rental allowances. The Danish Refugee Council had already raised concerns about this in a letter to the government in January (in Danish). 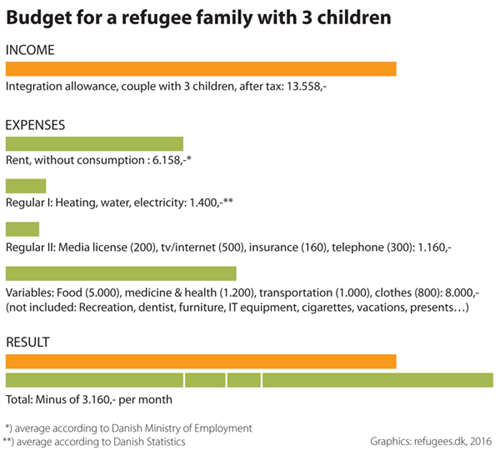 It’s difficult to see exactly where you should save 3,100 kroner in that budget for five people, which already includes only the most essential expenditure and at the lowest possible level.

Single parents will be hit even harder, as their rent and fixed expenses generally take up a larger part of a single parent’s budget when compared with a couple, as it is generally cheaper to live together. Media licence, Internet access, electricity, heating and food are all relatively more expensive for a single person than for a couple.

Newly arrived refugee families will have a more difficult time of it than those who have been here for several years. From now on, you must have been living here for two years before you are entitled to child benefit payments. Newly arrived families will also be expected to cover the costs of outfitting their homes. Also, while there is the possibility of securing a bonus of 1,500 kroner for having passed Prøve i Dansk 2, this generally takes at least two years and ca. 15% of refugees will be enrolled into Dansk 1 and will never have the chance to pass Dansk 2 (the language courses are separate, not continuous).

Many of the families and single adults, whom have lived in the country for several years and will now suddenly be on the lower, halved payment, will be forced to move to smaller and cheaper homes. They cannot expect, however, to get any assistance from the local council, as they are only obliged to help obtain a permanent residence and help with outfitting of the same, once. There is a recognised lack of availability of small, cheap accommodation in most parts of Denmark, and one can predict an element of panic as summer approaches, and an increasing number of families who risk being set out on the street as the months go by. The local council’s ability to help them will be limited at best.

The reasoning behind the introduction of the new capped payment is the idea that it will force people to get a job. However, many studies have shown that very few refugees are successful in finding steady employment during their first years in Denmark. It takes time to learn Danish and to get to know the labour market. With benefit payments, that don’t even cover the cost of rent and food, many refugees are going to have to use all their energy just trying to survive, and many more will no doubt be forced into working as black labour for minimal pay, just to supplement their incomes.

According to Lejernes Landsorganisation og Arbejderbevægelsens Erhvervsråd (article in Danish: avisen.dk), the lower benefit payments will actually force refugees away from the labour market, because the only accommodation they will be able to afford, will be far from the towns and workplaces. Yet refugees cannot move away from their local council for the first three years and neither can they borrow money to cover a deposit.