So far, a total of 620 refugees and family reunified from Syria lost their permits to stay, and 90 of these had a final decision. Hundreds of cases are still pending.

Which refugees is this about?

This only concerns the group of Syrians who have been granted asylum status under article 7(3) of the Danish Alien Act – a status which is given due to the general conditions in the country and without a personal risk profile. The vast majority of Syrians in Denmark do not belong to this group.

In 2019, the Danish authorities assessed that the general security had improved, so Immigration Service started to revoke and refuse to extend permits to Syrians given under art. 7(3). At first only to people from Damascus, but in 2021 they also started including people from Rif Damascus (the large region where Damascus is situated).

If a refugee loses his/her residence permit, a person who is family reunified to him/her will usually also lose his/her permit.

Immigration Service has picked out and reviewed around 800 cases with an option of revoking or refusing extensions, and they still have more than 300 cases pending. In 2/3 of the cases, the person kept the residence permit and was often granted another, stringer status, after the case had been re-assessed with a new interview and updated information.

If Immigration Service revokes or refuses extension, the case continues to the Refugee Appeals Board which is the appellate body. A lawyer will be provided. During the waiting time until the decision form the board, job and education can be continued. In 42% of the cases, the board has agreed with Immigration Service, and the you lose your residence permit finally, and the decision cannot be appealed – you can only ask for a re-opening by the same board. A deadline of 30 days will be given to leave the country, and you are forced to stay in a deportation camp if you don't go "voluntarily". However, no forced deportations are negotiated with Syria. So far, only a few have in fact moved into the deportation camps – most have left to other countries or managed to have their cases re-opened. 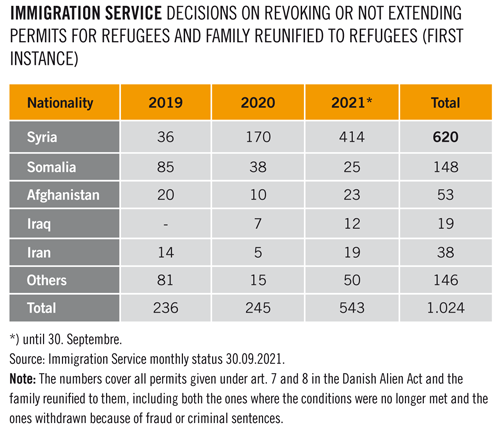 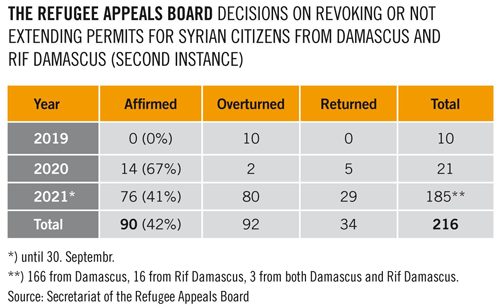 The Thorning Schmidt government passed a bill in February 2015 on a new, temporary protection status: article 7(3), especially designed for Syrian refugees. It offers a weaker protection, aiming at refugees who do not have an individual problem but fled only due to the general situation in their home country. It can be revoked as soon as even minor and not durable improvements can be seen. In practice it means that the most vulnerable people are granted a poorer protection than the strongest ones.

Furthermore, the 7(3) status includes a waiting time before access to family reunification, which was 3 years until a recent ruling against Denmark from the European Court of Human Rights changed it to 2 years.

The other asylum statuses, in short:
Art. 7(1): Convention status; meaning personally persecuted according to the UN Refugee Convention.
Art. 7(2): Subsidiary protection status; meaning personally at risk of being killed, tortured or exposed to inhuman or degrading treatment according to the European Convention on Human Rights and other conventions.
Art. 8: Under the UN resettlement program for refugees (quota refugee).

Syrian families living in Denmark often have different statuses between them. Men at the age of 18-42 (at risk of forced conscription) and those who have been politically active have been granted 7(1). Single women, widows, teenagers and elderly people have most often been granted 7(3) because they have fled form the general war, arbitrary violence and oppression. For that reason, we see families where the mother and the young children lose their permits to stay, while the grown-up son keeps his. Or two young siblings who arrived together in Denmark, where the brother keeps his 7(1) permit and the sister loses her 7(3). However, nuclear families are not separated, so if a husband has 7(1)-status, his wife and children under 18 are also allowed to stay.

All asylum statuses have since 2015 only been granted for 1-2 years at a time, and only with regard to a temporary stay. However, everybody can apply for permanent residency when and if you meet the criteria for that. But very few refugees are able to meet them. When the 7(3)-status was introduced, the parliament at the same time raised the bar for when you are sufficiently attached and integrated to stay only for that reason. Job, education, language etc. does not count as much as it did before, and in practice you have to be here for around 10 years before it counts.

The Danish authorities' assessment of the security situation in Syria has been heavily criticized, inter alia by UN, Amnesty International, Human Rights Watch and several of the sources used in the Danish country reports. No other countries in the EU have started revoking permits to Syrians. A judgment from the European Court of Human Rights against Russia in September stated that there are no safe areas in Syria, and that returnees are exposed to great risk. However, the Refugee Appeals Board has discussed the judgment and did not find reason to change its practice.

We keep you informed for free.
If you appreciate it,
become a member or donate!