By By Michala Clante Bendixen

When refugees were suddenly streaming in groups of several hundreds through the Danish border town Rødbyhavn and all the way to Copenhagen Central Station in September, they got a surprisingly positive reception. Hundreds of Danes, not being involved in things like this before, offered help and support – even in the form of transport by car, in spite of the risk of prosecution for this criminal offense. The police gave up taking the asylum seekers's finger prints against their will, which had been the procedure in Denmark until then. A photo of a Danish policeman playing with a refugee girl on the motorway got attention all over the world.

The help work was organized in groups where interpreters, food, clothes and train tickets was established in no time. A permanent help station grew in the middle of Copenhagen Central Station with a large banner: Refugees Welcome! However, the Danish Railroad Company had it removed after a weeks time. But the work goes on, and both newly formed groups as Venligboerne and established organisations like Danish Red Cross and Danish Refugee Council report of a huge rise in the number of citizens who offer voluntary work or donations to refugees.

Shortly after, a poll from Voxmeter for Ritzau showed that 78,2 percent think that Denmark should collaborate with EU on distribution of refugees arriving to Europe.

A recent aid program for refugees in the neighbour countries of Syria produced by the two largest (competing) TV-channels in Denmark raised 86 mio DKR, and the Red Cross had a record high result from their annual collection – also supporting refugees.

On September 12th almost 50,000 people gathered in front of the parliament under the slogans "Refugees Welcome" and "Welcome to Denmark". The event was arranged in one week and had exclusively been advertised on Facebook. Similar demonstrations were arranged in smaller cities. 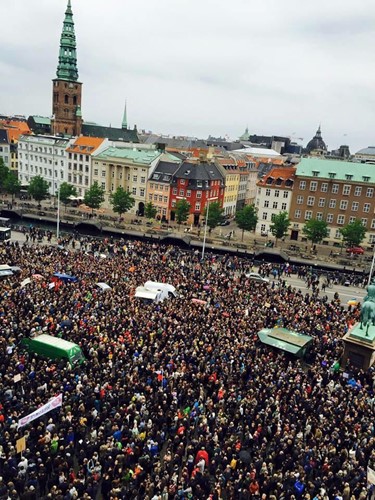 Last night around 25,000 took part in a "Walk for refugees" from Fredens Park to the parliament – supported by a number of cultural celebrities. Here is a Facebook status after the walk from the 25-year old Syrian refugee Amer Biro, who came to Denmark one year ago:

Thank you a thousand times, Danes, thank you for everything you have done for us.

Thank you for sharing your home, country, schools, food and everything else.

I am very proud that I am in a wonderful country like Denmark.

We escaped from war and oppression, yes, unfortunately. That time we did not think we would find our way home again.

But we have found it, we are in Denmark, we are home.

We did not choose to be refugees, but we chose to live in a wonderful country > DENMARK <

It means the world to us that you stand up and support and shout for us.

A huge respect to you.

My treasure is having met you, and it is a great pleasure for me. 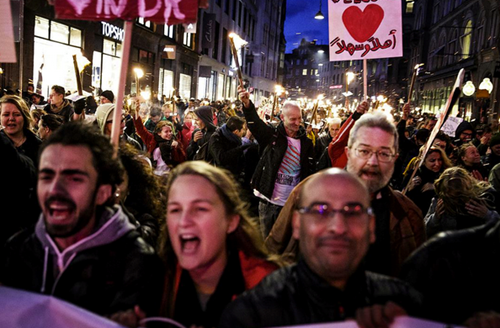 In contrast, the Danish government has expressed a very negative attitude towards refugees, and categorically refuses to take part in a common European collaboration. Special attention has come to the ads that Minister of Integration Inger Støjberg put in four Lebanese newspapers, warning about very strict rules for refugees in Denmark – with the clear intention of scaring away refugees from coming here. The ad was so misleading regarding the actual rules that the Ombudsman is investigating the case on his own initiative.

Before the ads were published, yours truly had a comment brought in the British newspaper The Guardian with the opposite message: Refugees are welcome in Denmark, they are treated well here. The comment got a lot of attention, not least in the Danish media, and was shared 18,000 times from the website.

After the ads were printed, the English spoken Lebanese newspaper The Daily Star published my reply. A group of Danes collected 170,000 DKR to have Støjberg's ads printed again, but this time with a handwritten apology for the hostility of our government and expression of sympathy and compassion for anybody who is forced to flee. The action has been referred to in Huffington Post and German newspapers.

Most asylum seekers are however still avoiding Denmark, preferring Germany and Sweden. The number of new applications in Denmark is a little lower than this time last year – in stark contrast to the great rise in numbers coming to our neighbour countries these days. Sweden registered 24,000 in September alone, Denmark around 1,700 (the number not officially stated). A new flyer with actual facts on the conditions in the three countries is trying to correct this imbalance, it is being distributed in Greece, Turkey and Germany by volunteers.