Only Syrians and Iraqis are now allowed to pass, and UN warns against chaos in Greece when tens of thousands will be stranded

PHOTOS: Refugees stranded in Northern Greece, beginning of February 2016 (by the author).

Since a  number of key countries on the Balkan, with the exception of Greece, met for a joint meeting about the refugee situation last Wednesday, February 17, things have gone fast.

The Balkan route is the route that the vast majority of refugees are using, after arriving in small boats via Turkey to Lesbos or one of the other Greek islands. From Greece the road continues via Macedonia, Serbia, Croatia/Hungary and Slovenia to Austria and Western Europe.

But on Sunday, February 21, the Macedonian authorities announced that henceforward Afghan refugees would no longer be allowed to pass.

There are already a large number of stranded refugees – Eritreans, Iranians, Pakistanis and others – who have been denied access to the official route for months. They will now be joined by the Afghan refugees, from this moment also considered illegal, as everyone not coming from Syria or Iraq.

Volunteers in the refugee camp in Idomeni on the Greek/Macedonian border report of chaotic scenes, where the authorities by force are returning the Afghan refugees to a recently set up camp by the city Thessaloniki or to Athens. 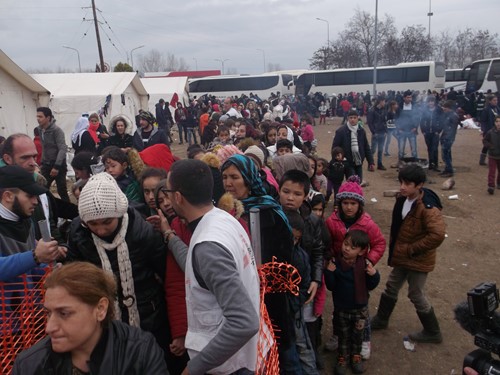 Especially the Afghan refugees have also used an alternative route through Turkey and Bulgaria overland, avoiding Greece. Until now the Serbian authorities have accepted them as refugees when arriving to the border town Dimitrovgrad in the Southeastern Serbia, but this practice has also been abolished now.

From Monday February 22 the policy is to return arriving refugees to Bulgaria. Here they will be considered illegal, and Amnesty International and Human Rights Watch have repeatedly documented  gross violations and robberies committed by the Bulgarian authorities, as well as indefinite detention in closed camps.

The current status is, the Balkan route is now totally closed for almost all refugee groups. Even for the two nationalities still accepted, there are restrictions, as not everyone has papers, and Austria has set up a limit to how many will be allowed to cross the border every day.

Wednesday February 24 the key countries on the Balkan route met once again in Vienna, and again without Greece who for that reason expressed discontent of not being invited. From the meeting the Serbian Minister of Justice Nikola Selaković announced that the security forces and military had been "put on alert", facing extraordinary assignments on the borders to Macedonia and Bulgaria.

Several bodies and aid organisations fear that the route will be closed completely down, and the head of the Greek Red Cross described Tuesday the development as "the worst imaginable scenario". Over the next few weeks tens of thousands of refugees may be stranded on the wrong side of the border between Macedonia and Greece, and also UN warns against the chaos that will follow from the latest restrictions.

Brian Esbensen is cand.scient.soc. specialized in aid policy and international relations. He is currently staying in Balkan where he has been following the refugee situation closely since the summer of 2015.