The increased efforts to get more refugees out on the labour market have borne fruit – and despite the bother, many businesses are happy for their new workers

By Michala Clante Bendixen (Translated from Danish by Tríona Sørensen)

The tripartite agreement from March 2016 appears to have borne fruit, despite the fact that the new IGU-education (Basic Integration Programme) has had a slow start. In the period from March – November 2016, 3,100 new refugees found work, which represents an increase of 75%.

According to Dansk Industri (English text) much of this is due to the fact that many of the refugees who arrived in 2014 and 2015 have been actively engaged in wage subsidy jobs and work experience. During the last two years, the number of refugees gaining regular employment after a job-training scheme has risen from 12% in 2014 to 22% in 2016.

The number of refugees with an IGU-contract (Basic Integration Programme) has risen from 1 to 176 in 6 months, 60 of which were entered into in January 2017. This suggests that the agreement is gaining momentum and is finally beginning to function as it should.

(Charts below are not translated, as they are borrowed from Ugebrevet A4) 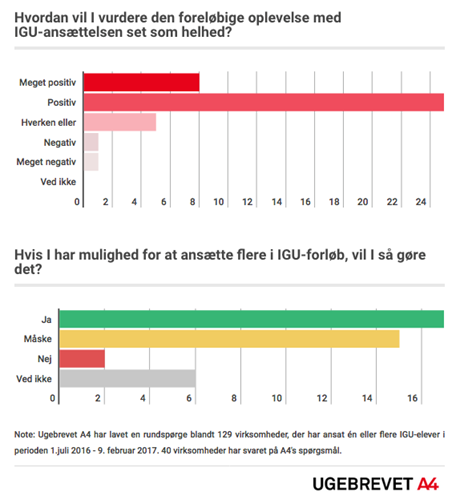 Businesses are happy with refugee-trainees

The new integration education, IGU, had a slow start but businesses are overwhelmingly satisfied with their new trainees and would also employ more IGU-trainees, if the opportunity arose. Despite the lack of help in terms of filling out forms or navigating the complicated education plans, which can make the scheme difficult to work with, 33 out of 40 businesses surveyed by Ugebrevet A4 (link in Danish) replied that they had had positive or very positive experiences overall – only 2 were negative.

As a rule, businesses must agree upon an arrangement with refugees themselves, without help from the local municipality. However, this hasn’t worked in practice, and municipalities or consultancies have had to step in with their knowledge concerning language courses etc. There has also been some confusion regarding the delegation of responsibility for the different areas during the scheme. Businesses have expressed a wish for a permanent resource person at the municipality, who can assist them.

Together, LG Insight and Foreningen Nydansker have developed 10 branch-specific IGU-courses. These can perhaps be a help to businesses going forward.

Several businesses have named the low levels of Danish as a problem, as refugees can be sent out on the scheme immediately, before s/he has completed a Danish course. Some suggest that they should begin with an introduction course and language school before beginning full-time work. Arriva have therefore established their own shorter training period of ca. 6 months duration. Their experience shows that a refugee’s Danish must be up to a usable level before they can take their driving test. Afterwards, it’s a good idea to undergo a short training period and then be offered a job on the same conditions as others as quickly as possible.

According to Ugebrevet A4 (link in Danish), the majority of IGU-trainees have found employment within the transport sector, in factories or agriculture/gardening. However, the National Gallery of Denmark and the Ministry of Food, Agriculture and Fisheries also have IGU-trainees.

From the refugees’ side, there isn’t great enthusiasm for starting an IGU-scheme. This is in part due to the fact that it’s not a recognised education and that the salary is in practice not much higher than integration benefit – in other words, difficult to get by on.

The Ramsdal Group, which is responsible for the JobMatch Project from Industriens Fond are of the opinion that the scheme lacks any real incitement when compared with unskilled work and should be revised.

The government and policy have an unambiguous focus on work as a central element to integration. Therefore, there is a stipulation that refugees must take part in an employment scheme (typically work experience) within 4 weeks after their arrival to a municipality. However, not all municipalities are in agreement as to whether this is the best policy. In the case of younger refugees in particular, it can be more productive to get them started on a youth education or give them support in starting their own business.

Educated workers such as engineers, tradesmen and IT-specialists are in high demand among Danish businesses. Why not educate some of the young refugees in these branches? More municipalities are going against the government and challenging the legislation. Silkeborg Municipality has written to the Minister that the municipality is currently breaking the law, but that they feel they have found a better solution than the one presented by the minister. According to the mayor, Steen Vindum (Venstre), the business community in the municipality is screaming out for an educated work force, so the best way to both satisfy them and get refugees off social support is to educate them. Read more in Ugebrevet A4.

What does Refugees Welcome think?

All newly arrived refugees express the desire to work and earn their own money. However, the Danish labour market is difficult to enter and this surprises many. Language is a large barrier and it takes time to learn Danish. There is also a need for a ‘learning phase’ to give them the chance to familiarise themselves with Danish rules and traditions.

We support the idea of an integration education but we believe it should be shorter and more intense. In addition, the economic return should be greater – the level of disposable income is in reality far below that of SU. We are also completely in agreement with Silkeborg Municipality in that there should be much more focus on getting the right education for the new refugees. The majority of refugees are young and in the long term, it would make more sense for everyone that they get the chance to specialise rather than work as unskilled labour.

Abel Zemhret stated in November last year, before he finally succeeded in finding a job: “We are forced into being institutionalised, which makes us helpless. At the same time, we meet negative expectations: the state practically treats us as though we were criminals. Each attempted scheme/programme should be evaluated and refugees should also be asked what their opinion is. The municipalities should act as a link to the business community and ensure there are work experience positions and binding agreements about regular employment. When refugees have to work 8 hours a day without getting a krone for it, and just have to start somewhere new every 3rd month, it’s basically slavery. We’re caught between the private business who exploit us and the state, which is trying to break us”.