Amnesty warns against returns in a new report, but Denmark turns down more Afghans than the rest of EU.

Through many years Denmark has had a stricter assessment on Afghan asylum seekers than the rest of Europe. In 2017 so far only 17% have been granted asylum. Compared to the average of EU, the chance outside Denmark is almost three times as big. Only Bulgaria and Hungary turn more down. 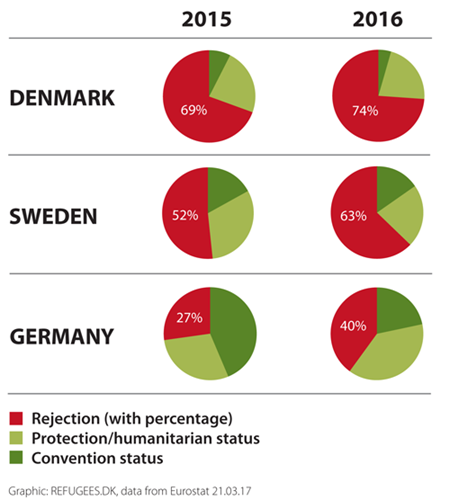 But the tendency is fewer permits and more returns in all of EU, in spite of the risk in Afghanistan now being higher than ever. Amnesty International warns in a new report that many will be returned to face certain death, and that the returns are against international law.

- The security situation has seriously deteriorated during the last few years, and there are now no more safe areas in the country. All returns to Afghanistan should be stopped immediately, says Claus Juul from Amnestys Danish office. Read more on Amnesty’s Danish website, (in Danish) and download the report 'Forced back to danger' (in English).

The number of Afghans asylum seekers in Europe rose by more than 400% from 2014 and 2015, but has now dropped again. When comparing second quarter of 2016 to second quarter of 2017, there was a decrease of 83%. See more statistics for EU in the EASO annual report 2016 (in English). Germany has received the vast majority of Afghans during recent years. 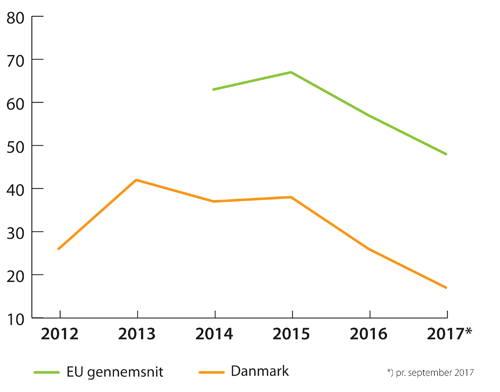 Afghans have been coming to Denmark since the 1980’s. But the percentage has been changing, as the chart below shows. Recent years, a rising part of them have been unaccompanied minors – making up for 46% of the Afghan asylum seekers in 2016.

PERCENTAGE OF AFGHANS AMONG NEW ASYLUM SEEKERS IN DENMARK 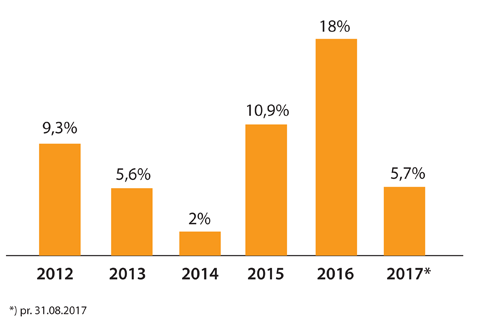 Right now there are around 110 Afghans in deportation phase, meaning they have been rejected and the police are working on their return. Last year 36 were returned, of these 16 by force. The number of rejected Afghans was in 2012 as high as 482, but the police has managed to return more and more.

The new report ‘Returning to Afghanistan’ (in Danish) from Danish Refugee Council documents that the ones who return – either after persuasion or by force – have serious difficulties with surviving, and they are some of the most vulnerable people in thye country. Afghanistan is No 2 on the list of the world’s mots dangerous countries, next after Syria.

We spend a lot of time finding numbers and making charts.
Please donate an amount to support us,
if you benefit from them!