The Danish Ministry of Integration has deliberately ignored a European court ruling for more than a year, which Denmark must follow. But the problem reaches even further back. 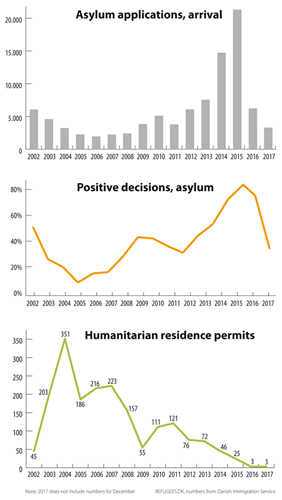 The ruling Paposhvili vs Belgium from The European Court of Human Rights which was stated in December 2016 was not a new law, but a precision and interpretation of the existing convention that Denmark signed back in 1950.

The Danish practice was significantly narrowed down by a guideline from minister Birthe Rønn Hornbech in 2010, which has been followed since then and which has meant rejection to hundreds of sick people. Some of them were, according to the new ruling, entitled to a residence permit.

Of course, the minister should have put all pending cases on hold as soon as the court ruling was known. However, this did not happen until 11 months later, after hard pressure from Radio24syv and Information, who proved that the ministry had ignored a number of approaches from lawyers and organisations about the new ruling and had continued to follow the old practice.

Refugees Welcome sent in two cases which had been rejected earlier, and asked to have them reopened with reference to the new court ruling in April and May – and received no answer at all.

But it is not sufficient to put the cases on hold and change the practice in the future. It should also be possible to have old rejected cases reopened, back to 2010 when the strict practice was introduced. Since then, the ministry has referred to the availability of the necessary treatment in the home country – without assessing if this particular person would have actual access to it.

The minister admitted the illegal practice in January 2018, and a number of cases rejected in 2017 will be reopened. However, at least 7 persons have already been deported, so it might be hard to find them – if they are still alive.

The court ruling also includes two other aspects which are in contrast to the Danish practice, and this goes even back to before 2010. One is the criteria for sickness, where the ruling says it doesn’t have to be immediately life threatening, it is sufficient if the sickness would cause severe suffering or clearly shorten the life span. The other is the need for care from close relatives, and here it must be considered whether these relatives could reasonably be expected to follow the sick person to the home country.

In 2013, Refugees Welcome published the report “The Character of Exception” where we documented that very strict criteria for sickness were used, and very few diagnoses were accepted. It was also proven that the treatment was often not actually available for the sick person in the home question. Moreover, the report pointed out that the Danish law holds several other criteria than sickness for getting humanitarian residence permit, but they are never used. During the writing of report, 80 permits were manually examined, and it appeared that the permit was given on average 429 days after final rejection on asylum – in other words, the sickness would in almost all cases have been developed after arrival in Denmark.

The graphics above show that the number of humanitarian permits is in direct contradiction to the number of asylum applications over the years.

Read more about humanitarian residence permit on our Facts page about the subject.