The committee (CPT) released a report today with severe criticism of the two dentention centres Ellebæk and Nykøbing Falster, used to detain asylum seekers whom the police suspect might go under ground.

- In a highly developed country as Denmark, where you – rightly – are proud of high human rights standards, it is shocking to find such appalling conditions, and one might question either the capability but also the will of Denmark to do it in such a bad way, says Hans Wolff who is the leader of the delegation visiting Ellebæk in April.

- Our findings are very severe. First of all, the physical conditions are extremely poor. We also find it inacceptable to place these people under prisonlike conditions as those we have seen. They are not criminals, but are put in a facilty much worse than a prison.

Hans Wolff describes the detention center as one of the worst in all of Europe that the committe has seen.

Refugees Welcome was one of the 13 civil society organisations which in a report and in a meeting with the committe in April pointed out a number of criticisms, which are now included in the final report from the committee. Among the organisations were Amnesty International and DIGNITY (Danish Center Against Torture).

- The committee visits many countries, and one can imagine in which countries we would normally find critical conditions, but I must say that when it comes to migrant detention centres, Denmark is – very surprisingly – one of the worst, says Hans Wolff and continues:

- The place is not suitable for humans. 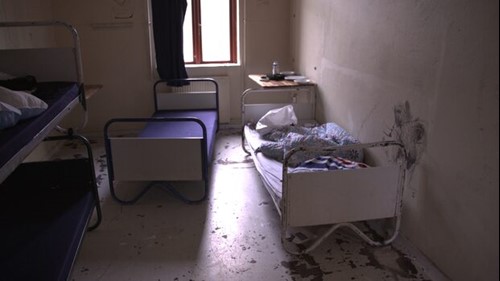 The committe gives Denmark 3 months to get in line with the recommendations:

- Either Denmark must make some very fast and serious changes on all the areas we have mentioned in the report. Or they must close down Ellebæk and move the detainees to a place with better faciliities, says Hans Wolff.

- If they do not follow our recommendations, the case may be taken to the European Court of Human Rights, with whom we have a very close collaboration. If it does, they will look further into our observations and assess whether the conditions comply with human rights, or whether Denmark must be sentenced. I think the latter is very likely.

A detainee is punished with 15 days in solitary confinement for being caught with a mobile phone – in spite of Danish Supreme Court having stated that they have a right to keep mobile phones. This is however not allowed according to prison rules.

- We were very surprised to find that detainees are punished so hard for having mobile phones. This emphasizes that the rules are for prisons, which is completely inacceptable. These people have the right to access their phones, where they would typically keep numbers to their friends and families.This is very essental, says Hans Wolff.

The report underlines that the detained migrants are in general not suspected or sentented for any criminal offences. If the authorities still find it necessary to detain them, this should be under as normal conditions as possible, with a minimum of internal security precautions.

The report critisises following conditions in Ellebæk:
- lack of staff
- too limited and too bad access to outdoor space
- overcrowding, with up to 4 persons in a cell
- worn down and unhygienic physical conditions in the buildings
- lack of activities
- no access to mobile phones
- no screening for mental or physical diseases
- too limited access health services
- other detainees are used as interpreters in stead of professional ones
- use of solitary confinement must be abolished
- detainees at risk of committing suicide are put naked in solitary confinement, which constitute degrading treatment.

Apart from Ellebæk and Nykøbing Falster the report also critisises the fact that overcrowding in normal prisons all over Denmark is only met with opening more places – Ellebæk is also being extended from 136 to 192 places. CPT advises Denmark to consider in a critical way whether too many are imprisoned and too few released. Recently a new bill was passed raising the sentences significantly (up to 2 years) for breaking the duty to report in Kærshovedgård, putting extra pressure on the real prisons.

The Council of Europe’s Committee for the Prevention of Torture and Inhuman or Degrading Treatment or Punishment (CPT) is a part of the European Council.

Read the full report or the English summary here.

Quotes from Hans Wolff are taken from TV2 homepage.