New book about assessment of asylum cases in Denmark

Michala Clante Bendixen, founder of both REFUGEES.DK and Refugees Welcome DK, launched a new book/report on June 9th; “Well-founded Fear – credibility and risk assessment in Danish asylum cases”. The book can be purchased in the printed version only in Danish, or in English and Danish as PDFs for download.

Do you know how the procedure is, when a person asks for asylum in Denmark? And do you know how it’s determined whether this person should be approved or rejected?

Very few can reply yes to these two questions. Not even the politicians who always keep repeating “when your asylum case is rejected, you must go home”. Yes, they are right – but only if the decision was correct. Many rejected people claim to be in danger. And if you look closer at the procedure, some of them could be right.

“It’s no secret that in Immigration Service you only get credit for giving negative decisions. That’s how it is”. Quote from former caseworker. 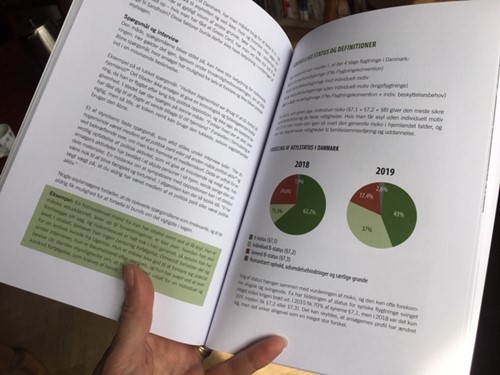 The book was written to create more awareness and knowledge about this topic and is meant for anybody who has an interest in refugees. It doesn’t require an academic background or foreknowledge.

The first chapter describes the Danish asylum procedure and the international and European conventions which are the base of the asylum system.

The two next chapters show how the assessment of the applicant’s credibility and the risk in her/his home country rely on a mixture of randomness, prejudice, and a number of factors which are all being used against the asylum seeker.

“80% of the new caseworkers didn’t know where Iraq was on a map when they started. They are young, they are prejudiced, and to them the whole Middle East is the same.” Quote from interpreter.

The fourth and last chapter discusses the political influence and views the Danish system in a European and international context, to round up with ten recommendations for improvements.

The book is based on the author’s 14 years of experience with refugees and a number of qualitative interviews with lawyers, interpreters, former employees at Immigration Service and the Refugee Appeals Board, other NGOs as well as refugees who have been through the process themselves and have been granted asylum.

It contains many charts, quotes and extracts from real cases. It's easy to read, and you can use it as a handbook, for documentation and as inspiration for discussions.

“I really felt under pressure – felt like shouting and running out, panicked. She said I had to reply Yes or No, but I couldn’t, I had to explain.” Quote from refugee.

The author is happy to come and talk about the book, she can be contacted at kontakt@refugees.dk

Become a member or make a donation to keep us going!