By Frederik Scheuer (translated to English by Daniel Lewis)

Frederik Scheuer is educated as a teacher, and is now part of the organisation “Action for Education,” which has the task of teaching and providing safety for children and young and older people in the refugee camp Vial on the Greek island Chios.

Can I be proud of being a Dane? My answer is a resounding no! Right now I find myself on one of the Greek islands, Chios. Last night, a sea of flames in the Moria camp on the island of Lesbos drove thousands of refugees on yet another escape. People had to seek shelter in the open air in the cold landscape, because neither cities on the island nor elsewhere in Europe welcome them. Even children running away from the flames in the Moria camp were met with tear gas by the Greek police.

These are people who have fled war and oppression, or who have been expelled from their homelands. These are people who are prepared to risk their lives by jumping into crowded rubber boats from the Turkish coast and crossing the Aegean Sea on a pitch-black night - thus avoiding the Greek and Turkish coastguards, with a hope of ending upon one of the Greek atolls, where despair might turn into a future.

At Chios, I met a nine-year-old girl who has been a "resident" in the Camp Vial refugee camp for over a year. In the overcrowded camp, 5,000 "neighbors" walk past the little girl, who is sitting alone squatting and digging with a small wooden stick in the dusty ground. What the little girl is digging for is answers: ''Can I get away from here?'' she asks as I end up standing in front of her. To that I must simply reply that she must retain her strength. I dare not promise the little desperate girl something that will not be fulfilled. She turns her face to the ground again and continues her digging. When the first stars hit the night sky, the "residents" retreat into shelter. Families in camping tents, single people in festival toilets and the unlucky ones lie down on a piece of cardboard - however, they are "lucky" that it is not rainy season or winter yet. 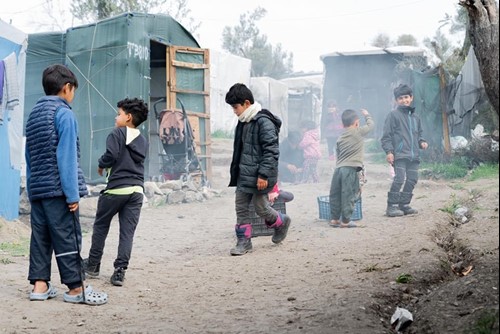 We in Denmark currently only accept 200 quota refugees, referring to integration problems. Meanwhile, on the Greek islands and in the surrounding areas, a heroic struggle is being waged by organizations, volunteers and locals against the unfair treatment of the thousands of refugees. A struggle that is met with passivity on the part of the Danish government. Danish politicians are more likely to cheer the fact that the number of refugees in Denmark has fallen.

Get into the fight, Denmark! It's clear that this refugee situation must be resolved by joint European decisions, but Denmark has failed to honor its responsibilities in the agreement we have had for more than 30 years to receive 500 quota refugees a year. In the camps, violations of basic human rights are commonplace, and the ''residents'' live in completely unjust conditions, while European and international law is being broken out on the Aegean Sea. Greek coastguards capture and force refugees back to the Turkish border to avoid more refugees - in this way, hope and faith in a life are removed from these people, who must constantly flee for their lives.

Both the EU and Denmark know how it is. Other European countries offer to receive some of the most vulnerable, even though they already have far more asylum seekers than we have. There is no excuse, Denmark. Show solidarity! We must respond now, every day counts! Bring children, families, young people and the elderly home to Denmark, we have the resources and we have a responsibility. Refugees, like all people, deserve a life of freedom and dignity.

Help us to keep this site running!
We need more members