FACTS: Who are at risk to have their asylum status revoked?

If an asylum status is revoked, it also affects persons who have been reunited with those persons. When the Danish Immigration Service decides to withdraw a residence permit, the case automatically goes on to the Refugee Appeals Board, where the final decision is made. So far, there are no plans to withdraw residence permits of Syrian refugees who have been granted §7.1 status, which the vast majority of Syrian refugees in Denmark have.

“All of my energy is used up and I can no longer ensure that my children get what they need.” A Syrian woman explains this to Danish newspaper Politiken in 2021. She lives in Damascus: The area that Denmark wants to send refugees back to. She explains how people are starving, and that some are killing for money or food. She has now decided to flee Syria with her two sons.

This year marks the 10-year anniversary of the war in Syria and it is still ongoing. It is a war that has cost over 400,000 lives, driven 12 million to flee Syria and left the country in ruins. Organizations working in Syria today describe the situation as hopeless and worse than just a few years ago. Nevertheless, Denmark finds that the Damascus area is now so safe that people can be sent back – despite strong criticism from, among others, Amnesty International, UNHCR and DRC the Danish Refugee Council – the latter even participated in writing a report which is used to justify the decisions.

Not all cases have reached a decision in the Refugee Appeals Board yet. But so far, the total number of Syrian cases decided by the board from 2019 to 2021 was 78. Out of these, 28 were new applicants who had not been granted asylum before. 21 cases have been overturned (granted asylum), 47 have been confirmed (lost or not been granted asylum) and 10 cases were sent back to Immigration Service again. Some of the persons whom lost their asylum had residence for other reasons, so the number of people who are in 'exit position' at the moment is 34.

A new group of 350 people is being reviewed now, namely those who come from the bigger Rif-region surrounding Damascus. At the beginning of 2021, three cases from Rif-Damascus were ratified by Refugee Appeals Board on the remarkable grounds:

“As stated by the Danish Immigration Service, the Refugee Appeals Board agrees that a refusal to extend the complainant's residence permit will constitute a significant interference with the complainant's right to family and private life. The Refugee Appeals Board also agrees with the reasons stated by the Danish Immigration Service in this regard, that the legal basis for the intervention is legitimate and safeguards the public interest in maintaining effective immigration control, and that the intervention has a recognizable purpose.”

Yet, one may wonder how immigration control can be a recognizable purpose when Denmark's influx of refugees has been extremely low since mid-2016 and is now the lowest ever in the 30 years in which we have comparable figures.

In reality, Syrians cannot be forcibly returned because Denmark does not want to negotiate an agreement with the Assad regime. People who do not leave Denmark voluntarily will therefore end up in deportation centers indefinitely instead – which according to Mattias Tesfaye's own ministry costs 300,000 kroner a year per. person. In other words, Danish authorities choose to remove these Syrians from their everyday life, in which many of them have school or jobs. Instead they will be placed in deportation centers under prison-like conditions, depriving them of a normal life proven to make people sick and destroy their skills. All this in order to 'maintain effective immigration control'.

When other countries and countless reports describe Syria as life-threatening to reside in, is it then at all possible for the Syrians to return home?

Mattias Tesfaye has on several occasions referred to the hundreds of thousands of Syrians who have chosen to return home as a justification for why it is now reasonable to send the people with §7.3 back to Syria. However, the people he refers to have returned from inhumane living conditions in neighboring countries. A new report from Save the Children also shows that only 3% of Syrian children in Turkey and 9% in Jordan and the Netherlands want to return to Syria. From Denmark, 137 Syrians chose to return home voluntarily with financial support last year. However, Refugees Welcome has experienced through legal counselling that the decision is often taken due to the rest of the family not being granted family reunification – the residents thus travel back despite the high risk to be with their loved ones.

Approximately 35,000 Syrians have arrived in Denmark since 2011, and 4,500 of them have been granted asylum due to the general risk (§7.3). Out of those, about 1,200 come from the Damascus area including the Rif region, and it is this group who are getting their residence permits reassessed now. There is a tendency for §7.3 to be assigned to the most vulnerable groups, namely women, elderly and unaccompanied children. These groups often do not have an individual motive for asylum because they e.g. have not had to avoid military service. Women thus make up more than half of those who have been granted §7.3 and who stand to lose their residence permit as soon as the Danish authorities consider their place of origin to be safe. 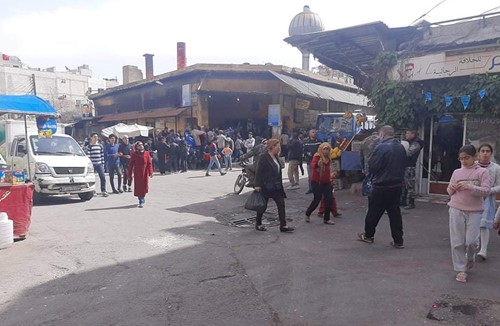 The world has failed Syrians

The idea that the Damascus area in Syria is now safe enough for refugees to return was based on a country report written by the Danish Immigration Service and DRC Danish Refugee Council and published in February 2019. The report drew pictures of a Syria where especially the government-controlled areas and particularly the province of Damascus had become more secure when looking at the risk of arbitrary violence, bombs, etc. However, on the other hand the Assad regime has tightened its grip on its territories, and the risk of surveillance, arrests, torture, etc. is therefore even greater. On the basis of the report it was concluded that the general conditions in the Damascus area were now so good that there was no longer a need for temporary protection for Syrians from there. However, the DRC, which was co-author of the report, interprets it differently and does not find it justifiable to send refugees back to Syria. Since then, many reports have been launched on the situation in Syria, and most of them paint a picture of a country in deep crisis and insecurity, describing how the humanitarian situation in some areas is even worse than when the war raged.

"The situation in Syria today is much worse than what it was five or ten years ago, due to sanctions, the aftermath of the war and not least Covid-19."
- Andrei Engstrand-Neacsu, leader of the Red Cross and Red Crescent in Syria, March 15, 2021

”Syria is a “living nightmare” where about half of the children have never lived a day without war and 60 percent of Syrians are at risk of going hungry.”
- Antonio Guterres , U.N. Secretary-General

When they maintain that it's safe for Syrians to return, the Danish government is thus going against the assessment of all other countries in Europe, several human rights organizations, UNHCR and not least DRC, who was co-author of the report.

The battle for the Danish voters

Why is it so important for the Danish government to send people back to a situation that everyone else can see is dangerous? The answer lies in "the paradigm shift" which was voted through in 2019, where the focus shifted from integration to repatriation. The goal was clear; to send people back to their home countries as soon as possible, preferably they should not even have the time to become integrated or take root in Denmark. In a direct letter from January, the UNHCR strongly urged Denmark to "end the systematic, regular reassessment of protection needs and ensure compliance with standards and practices for the inclusion of protection status with Article 1C of the 1951 Refugee Convention", but the Danish government has not reacted to the letter.

The Danish decisions are more about the parties' positioning in the parliament rather than about the refugees' safety and future. Mattias Tesfaye has actively pushed for the Danish Immigration Service to process the Syrian cases quickly, and Mette Frederiksen has stated that the goal is 0 refugees in Denmark. The politicians will argue that the decisions in the individual cases do not lie with the government. However, unlike other countries in Europe, it is not an independent court that has the final say in Denmark; instead, it is the Refugee Appeals Board, where one of the only three members is an employee of the Ministry of Integration.