Applying for asylum is a human right, yet the unlucky ones who are rejected are subject to society’s most severe punishment

The granting of asylum status is something of a lottery and there are enormous differences between the judgements made in European countries. Nonetheless, in Denmark, those whose applications are rejected are now treated as criminals. This is done in a conscious attempt to force them into leaving voluntarily. The new practice, described in this article, will lead to an increase in people with mental illness and a rise in the numbers going underground, but not necessarily to an increase in deportations. This is due to the fact that a number of those affected would rather die than be deported, and in many cases, it is impossible to deport someone without their complicity.

The decision concerning special deportation centres goes back to the previous government: conditions for rejected asylum seekers should be made so unbearable, that they would choose to leave voluntarily. Last year, the disused barracks at Sjælsmark, 2km from Sandholm in northern Sjælland, was taken into use as the first deportation centre.

However, Hørsholm Local Council have consistently worked against the expansion and rebuilding of Sjælsmark, and therefore, the first asylum package L62 (in Danish) from November outlined proposals for a new, larger deportation centre ‘far away from larger towns’. Back then, minister Inger Støjberg (V) said, “If you have to leave Denmark or are here on tolerated residency, you are not supposed to have a relatively normal family life in Copenhagen, for example”.

The abandoned, open prison at Kærshovedgård outside Ikast is now being filled up with rejected asylum seekers. Both deportation centres are run by the prison service, with “focus on surveillance and security” (see the info sheet in Danish from the Danish Immigration Service). The prison service staff are not used to working with asylum seekers, and many are of the impression that they are dealing with foreign criminals. An article about Kærshovedgård on the prison service website states, “The majority of those who come here are criminal asylum seekers, who have been rejected and must be sent home”. This is incorrect. There is room for 600 people, and there are in total just 67 people on Tolerated Stay in Denmark (and not all of these are criminals), and a further 120 who are criminals sentenced to expulsion and have a special duty to report to the police until this can be carried out. Many of them have family in Denmark. This means that a smaller proportion of the residents will be criminals, who have served their sentence but cannot be sent home, and these now live together with a much larger group of completely innocent people, who have merely asked for protection in Denmark, but got a negative answer. 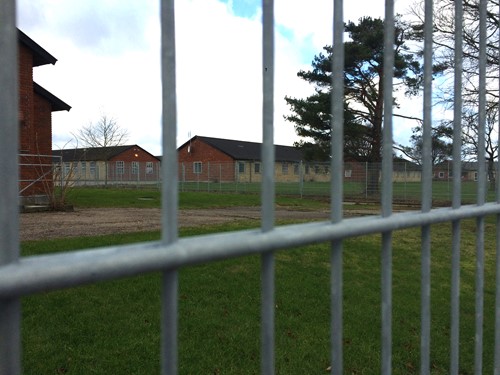 Prison officers have taken a 3-year long education. In Danish prisons, an effort is made to maintain the inmates’ skills and sense of human worth, while also focusing on preparing them for life once they are released. As an inmate, you are invited to take part in activities all the time – it is the act of detention, which is the punishment. Now, they are working with asylum seekers, who have never done anything illegal – and yet the staff’s task is to make their lives as empty and unbearable as possible.

At Kærshovedgård, residents are required to stay within the centre at night. This is the result of the direct acquiescence to a wish from the local mayor, “It will create a greater sense of security for the neighbours and citizens in the area, if they know that those at the centre must stay in their rooms at night. People are most nervous at night, when it is dark, so I think this will create more security”, says mayor in Ikast-Brande Local Council, Carsten Kissmeyer (V). This was not originally part of the asylum package. The town council has also ruled that the asylum seekers are not allowed to use the buses that drive into the nearest village, 7km away, rendering them totally isolated at the centre.

The closed prison at Ellebæk, which is adjacent to reception centre Sandholm, has already been in use for many years for the detention of asylum seekers, even if they have done nothing illegal. There have been ca. 800 admissions a year, lasting from a few days to two and a half years. This practice gave rise to criticism from the UN’s rapporteur on Torture in 2009, and Amnesty International wrote a series of articles in 2011 and a report in 2013, which proved that both torture survivors and the mentally ill sat locked up. Amnesty also followed 110 ‘extensions’, where a judge would, via satellite, review cases for continued incarceration every four weeks. Not a single one led to a release.

The asylum package from November also contained a paragraph stating that from now on, ‘rejected asylum seekers must be detained whenever possible’. This is why there is no longer space at Ellebæk, and why yet another old, dilapidated prison has been pressed into service, this time at Vridsløselille in Albertslund. Here, innocent asylum seekers sit locked into individual cells almost around the clock. “The conditions in Vridsløselille give me cause for grave concerns, also in relation to adverse psychological impact”, stated the Ombudsman after an unannounced visit on the 29th February (link to Danish text), together with the Danish Institute for Human Rights and DIGNITY.

The Danish National Police and the former Minister for Integration, Birthe Rønn Hornbæk, have previously drawn attention to the fact that an increase in incarceration has already been tried, and did not have the desired effect. 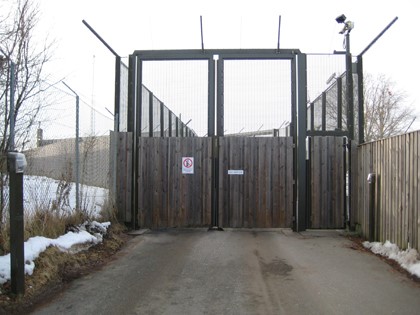 The press are currently denied access and visitors may not take photographs. Laura Møller Henriksen is a volunteer at the asylum centre in Kongelunden, and describes her experience of Kærshovedgård here:

“In March 2016, my friend Kaywan Yari was sent to the deportation centre at Kærshovedgård, and his little brother Erfan, 19 years old, is due to follow him there in May. The brothers are Kurds from Iran, who fled from the Iranian regime. They have lived at Kongelunden for more than five years and have had their application for asylum finally rejected.

The brothers are known for being an invaluable asset to the asylum centre. They have a large network of friends, colleagues and classmates and were already an active part of Danish society. Erfan goes to 10th grade and Kaywan took an education as a hairdresser at Københavns Frisørskole, and has since found work experience as a hairdresser.

On Saturday 16th April, Erfan and I went to Kærshovedgård to visit Kaywan. We found a place where great effort is being made to ensure that there is nothing to do. All appliances have been removed from the kitchen. The previous inmates had their own kitchen, workshop and gym. All of this has been taken away. The centre’s isolated location is no coincidence. When you have to be within the centre every night, are forbidden from taking the bus within the local council and don’t get any cash allowance at all, then you’re stuck.

Since coming to Denmark, both Kaywan and Erfan have been as active as possible, also in helping many others. Erfan was only a child when he came. Kaywan keeps dejectedly repeating, “I don’t understand why I’m here – I’m not a criminal. This is not an asylum centre. This is a prison. They speak to me as if I were a criminal”.

The staff were welcoming towards me as guest. They also expressed their own frustrations about the lack of information from the Danish Immigration Service, that they must improvise systems and rules, and that several things didn’t yet function as they should. Some of the prison officers sought to uphold Inger Støjberg’s pronouncements about how the stay should be made as unbearable as possible, while others stated to me directly, that they were also human.

It cuts right into your heart to bear witness to these systematic “motivational measures”, to the deprivation of rights and the criminalisation of innocent people. According to the residents, two people have already disappeared and many others never arrived, because they’ve gone underground instead. According to personnel at the centre, 30-50 asylum seekers should have arrived before Easter, yet on the 16th April, there were ca. 20 residents. Could it be that this is creating a parallel society in Denmark? More criminality? That the camp doesn’t work as planned?

I’m writing this with tears in my eyes because it’s difficult to grasp, and to bear witness to what is happening to innocent people in the constitutional state of Denmark. I’m also afraid that there are very many Danes who have no idea what’s going on. On the door to room 324 at Kærshovedgård, a blue marker has been used to write, “ENDURE”. 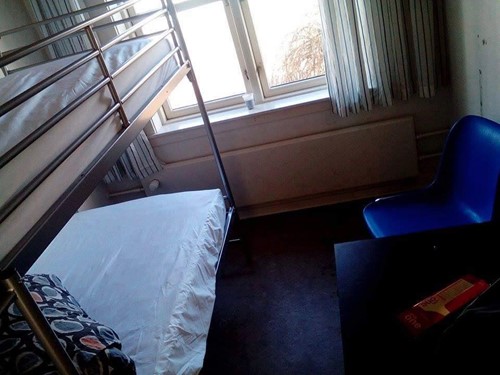 Morten Goll is the leader of Trampoline House in Copenhagen. He made a complaint, after having visited his good friend N from Afghanistan in prison. N had previously had his application for asylum rejected and went underground out of fear for deportation. One night, he was caught travelling by train without a ticket and was placed in Vridsløselille. He spent more than a month there, before being deported to Afghanistan.

Morten Goll found that N, who had been mentally sound prior to his incarceration, had completely altered behaviour after just three weeks in prison. He had pains in his body and head, his hands shook violently, he couldn’t sit still, had tics, was constantly on the lookout around him and rambled incoherently. His short-term memory was almost gone. He referred to how he sometimes saw three people, and was aware that this shouldn’t be the case: one was himself, N, the other was N without eyes and the third had glasses. He was extremely confused and scared. He said he wanted to talk to his father. Morten knew, however, that his father had died several years earlier in Afghanistan. He also told him that he couldn’t sleep at night – the other detainees screamed at night and beat on the doors.

After some discussion, an agreement was made with personnel, allowing N access to his telephone and numbers were found for his family, so they could receive him in Kabul. A psychiatrist was allowed to examine him and deemed him to be suffering from stress disorder. Shortly afterwards, he was put on a plane to Afghanistan.

In their report ‘Detained asylum seekers in Ellebæk, 2013’ (only in Danish), Amnesty International wrote:

“Amnesty International has previously outlined the problems with detention of asylum seekers, who are survivors of torture, or due to other reasons, are particularly vulnerable in Denmark. (…) A series of studies indicate that detention generates significant stress for asylum seekers. For example, it can lead to deterioration of physical and mental health and can often provoke depression, angst and PTSD. The UN Refugee Agency (UNHCR) underlines that asylum seekers should only be detained as an absolute last resort, and only after a medical assessment of the asylum seekers physical and mental health has been carried out. Detention of vulnerable people in a manner that does not take appropriate consideration of these issues can be against article 3 of the European Human Rights Convention, which forbids torture and inhumane or degrading treatment.”

Amnesty recommends that, as a minimum, screening should take place prior to incarceration, a position shared by the Danish Institute for Human Rights (Status 2014-15, page 12). However, the story of N in Vridsløselille demonstrates that even healthy people can by damaged by incarceration of this kind.

Warda from Somalia is 23 years old and had her claim for asylum rejected. She has lived at Sjælsmark since last year and has helped organise several protests against Sjælsmark. She tells that, “We’ve been criticised by those who think that we’re bad people, who have just come here to take their things. But we haven’t come to destroy anyone’s life. We’ve just come to look for peace and a better life, which we didn’t have in our homeland”. 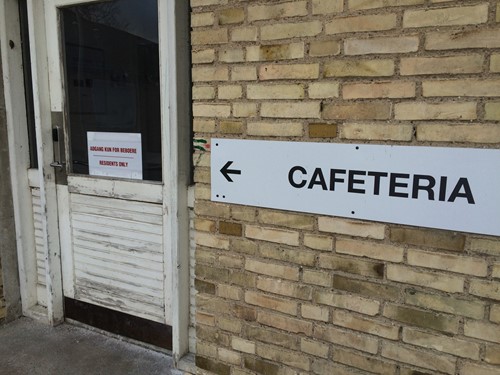