The assessment of whether or not a person is in danger should be impartial and non-political. However, decisions from our neighbouring countries are highly different and tendentious.

By Michala Clante Bendixen (Translated from Danish by Tríona Sørensen) 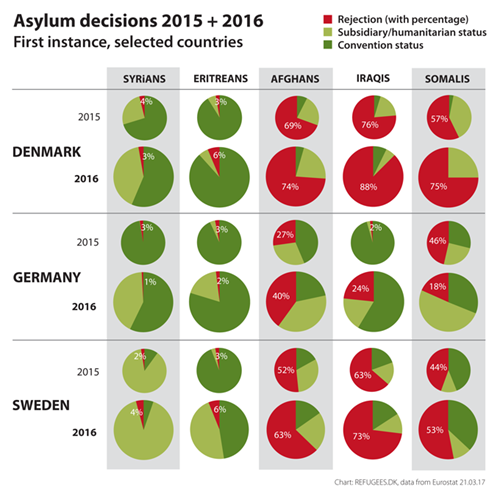 Rejections: In the majority of cases, the ruling can be appealed and a small number will be granted asylum after appeal. In the graph, the precise percentage is only shown for rejected applications.

Protection/humanitarian status: Also known as subsidiary protection: the applicant does not fall within the Refugee Convention’s definition of persecution, but risks torture, assault or inhumane treatment. Countries can also decide to take the humanitarian situation – such as extremely bad living standards, life-threatening illness etc – into account.

Convention status: this refers directly to the UN Refugee Convention and guarantees the person more security in a number of different areas than other forms of protection.

When you apply for asylum in Europe, you are called in to one or more interviews, where you must explain why you cannot return to your homeland. In Denmark, case workers from the Immigration Service are responsible for these interviews and the proceeding assessment of the personal case, based on a background of general information from the country in question. In Sweden, it is the Migrationsverket and in Germany, the BAMF (Bundesamt für Migration und Flüchtlinge). These authorities are directly answerable to a minister and a government. The decision is called a first instance decsision, and if rejected, the European countries have different options in terms of appealing the ruling. In Denmark, it is the Danish Refugee Appeals Board who are the second (and final) authority, while in our neighbouring countries there is access to judicial appeal on several levels.

All asylum rulings must relate to the Refugee Convention and the other human rights conventions, and they are legal assessments based on a judgement in each individual case. Is the person is question credible and is he/she at risk of persecution, torture or inhumane treatment? As the Danish parliament is a signatory of the conventions, it is not up to the government or a minister to decide who should and should not be granted asylum. Or at least, it shouldn’t be…

Already by 2015, there was an extremely large difference in how great a chance the same person had in terms of being granted asylum in Denmark and our neighbouring countries. This is deeply alarming, as each assessment should be built upon the same parameters: credibility and risk. If you were an Iraqi asylum seeker in 2015, there was a 95% chance that a case worker in Berlin would grant you asylum, indeed, the strongest possible asylum status, whereas their equivalent in Copenhagen would have reached the exact opposite conclusion: 76% risk of rejection and just a very small percentage chance of being granted asylum with convention status.

The graph shows the rulings in the first authority for the last two years for the largest groups of refugees. The pie charts all show a marked increase in the number of rejections in 2016 when compared with 2015 and that fewer have been granted convention status. The only exception is the Somalis in Germany.

“This overview very clearly illustrates how asylum rulings are a politically controlled process. Partly because we can see the great difference in the percentage of rejections in the first instance case handling of asylum applications from the same groups of refugees in different countries and also because we can see significant changes in the respective countries rejection practices from 2015 – 2016. This politically-steered arbitrariness has enormous consequences for the people who suddenly find themselves in the group that’s rejected”, tells Martin Lemberg-Pedersen, assistant professor at Global Refugee Studies.

Martin Lemberg-Pedersen remarks that according to the graph, last year, Denmark rejected almost twice as many Afghan asylum seekers as Germany as well as 88% of the Iraqi asylum seekers, whereas Germany rejected just 24%. However, a marked increase in the rejection of Iraqis is also noted amongst the German figures, as the total lay at just 2% in 2015. He also points out that Swedes now reject twice as many Eritreans as they did last year and that they generally, in both 2015 and 2016, took a harder stance than the Germans.

These figures would suggest that there is less need for protection if you belong to one of the five nationalities. However, the background information upon which the assessments are based, demonstrates a higher risk for Syrians, Afghans and Iraqis during the same time period. Conditions in Eritrea remain unchanged and in the case of Somalia, recent reports have indicated both improvement and deterioration in the security situation.

There are also signs of a spill-over effect of the lowest common denominator, as we saw both Sweden and Germany introduce restrictions for family reunification after Denmark brought in a 3 year waiting time for family reunification in certain cases. For example, in 2015, Germany gave all Syrians convention status, while in 2016 they have matched Denmark, where just slightly over 50% are granted it. Germany has also made a great leap towards a much sharper assessment of Iraqis, as both Denmark and Sweden had already done.

One very eye-catching development is that of the assessment of Eritreans in Sweden, if you compare 2015 and 2016. In 2015, all three countries were in agreement that the enforced military service with no fixed end date, which the majority of Eritreans are fleeing from, fell under the Refugee Convention’s definition of persecution. However, in 2016, Sweden suddenly decided that only half were entitled to convention status – the others were granted the 1-year temporary protection, which the Swedish government introduced in June 2016. In the same round, they also enacted that only refugees with convention status would be granted family reunification. So by changing the status of Eritreans, they halved the number of partners and children from Eritrea.

“We often see that politicians – especially those sitting in government – give the impression that the percentage of acknowledgment for specific groups of refugees is an expression of a fundamental credibility in relation to their asylum cases”, says Martin Lemberg-Pedersen. “We’ve heard Lars Løkke, Inger Støjberg and Mette Frederiksen argue for this, also in the context of the boat refugees coming to Italy from Libya. This argument doesn’t hold, however, as asylum processes are fundamentally influenced by politics. This updated overview is just one example of this”, concludes the researcher.

The figures the graph is based on can be downloaded as an Excel file here and come from Eurostats Asylum Statistics March 2017.

What is the opinion of Refugees Welcome?

More than a year ago, we pointed out that the deviation in rulings was so great, that it can’t be explained in the context of the applicant’s background. It appears that asylum seekers are subjected to a lottery, which will decide their fate. Political mood is of great importance, but conditions such as interview technique, cultural understanding and the competence of the interpreter also play a deciding role. Especially since a large number of the rejections are based on “lack of credibility” and are therefore rejected before the serious work of assessing the risk can begin. It is only in the cases where the risk is indisputable, as it is at the moment for Syrians and Eritreans, that credibility plays little to no part. Nevertheless, all politicians insist that you “must respect a rejection and go home”.

Refugees Welcome recommends that Denmark introduces an education and examination of all interpreters, summon all asylum seekers to a preparatory meeting with an independent organisation such as the Danish Refugee Council before interviews and that Denmark takes its point of departure in the UNHCR’s recommendations and rulings. The Danish Refugee Appeals Board must be made genuinely politically independent and there must be possibility for appeals. On the European level, we recommend that common procedures and guidelines be established for the whole of the EU and that a plan of distribution is introduced. A concurrent large-scale venture concerning quota refugees would also make smugglers less necessary and more asylum seekers with a weak motive for asylum would give up their attempts.