The number of permanent residency permits has nose-dived – an increasing number of people live in Denmark with 1 year residency cards.

INFO
The current rules were introduced in May 2017 and prior to this, were changed in 2002, 2007, 2010, 2012 and 2015. The most abrupt tightening happened in 2010 with the introduction of the point system, which was then scrapped less than a year later by a new government. The system has, however, continued until the present day, albeit in a new version. The rules change so often that it’s impossible to build a future upon them. The current rules demand 8 years residency, regular, full-time employment during 3.5 of the last 4 years and that you must have passed the Danish 2 exam (the Danish requirement hasn’t even been updated on the Immigration Service’s own statistics 30/11.) 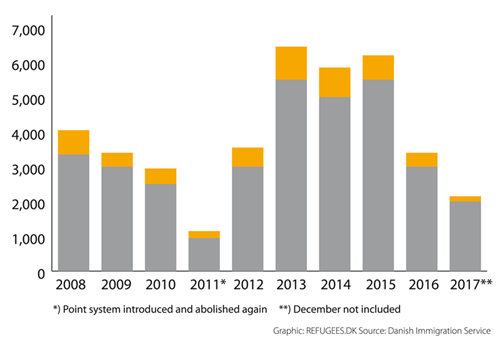 PERMANENT RESIDENCY PERMITS, OF WHICH GRANTED TO REFUGEES 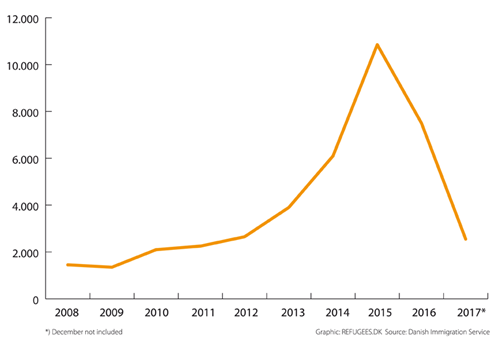 Dansk Folkeparti have begun calling it ‘a paradigm shift’, every time they push yet another tightening through in an area where it’ll soon be impossible to think up more restrictions. However, if we look back, there has actually been two real paradigm shifts in relation to refugees and immigrants in recent times. The first was in 2001, when Anders Fogh’s government started an avalanche of changes to legislation and reduced the number of asylum seekers coming to Denmark to almost null. The next took place gradually during recent years, and has gone unnoticed by the majority. Here, it’s not just a case of declared government policy, but a change of attitude which has crept in amongst almost all of the political parties. Refugees are no longer seen as people who have lost their homelands and who should be allowed to settle in Denmark. Now, they are seen as people who reside here temporarily and who should return to where they came from as quickly as possible. 800 Somalis are soon to be thrown out of the country, also those who are in full-time employment and have learned Danish.

Refugees no longer receive support and care in dealing with their traumas and challenges, instead, they are met with the same tough demands and rules which apply for all – regardless of whether you have fled from an Iranian torture prison or have come to play violin for an orchestra.

The shift is most obvious when looking at the residency permits themselves. Until recently, you automatically got either 5 or 7 years residency, if you were recognised as a refugee. Now, the most you can get is two years residency and 1 out of every 3 refugees is only granted 1 year’s residency to begin with.

You must apply to have these residency permits extended every second year, until you are lucky enough to be granted permanent residency. However, the days when refugees could apply sooner than an immigrant, or even for a period be granted permanent residency after a set number of years, are long gone Now, all have to fulfil the restrictive demands and everyone must wait 8 years, unless you belong to the microscopic elite of the well-paid, well-educated and permanently employed, who can apply after 4 years.

The demands are difficult to live up to for many and they change constantly, which, in and of itself, makes it impossible for many to time the point where they actually fulfil the criteria correctly. At the moment, for example, taking an education in Denmark counts for nothing. This means that Shamis, who came to Denmark as a refugee child and has lived here legally for 16 years, will have to wait at least 20 years before she can be granted permanent residency.

The idea that refugees should return home again, as soon as the conditions in their homelands are slightly improved, seems relatively sensible in theory. The problem is that it just doesn’t work in practice. The author and three other experts recently outlined this for Altinget. Firstly, those types of conflicts are generally protracted – 17 years on average, according to the UN. Secondly, it’s impossible to avoid that with time, the refugees who have been here for longer periods will have formed strong bonds in the country where they temporarily reside. Thirdly, many homelands refuse to take their own citizens in again. Finally, there is also a clear lack of positive incentives to encourage returning home.

And that’s before we even reach the two most important arguments for why it can’t work. The first is the human one: it’s not fair to uproot a person again, after they’ve already been forced to abandon everything – their family, history, belongings, language, culture, food and climate. It takes a long time to adjust to a new life and you can’t do it over and over. Which brings us to the final argument: we can’t afford it.

A newly-arrived refugee requires lots of resources: help to learn the language and culture, and you need to establish a network and gain experience before you can begin to seriously contribute to society. Perhaps it’s too late for yourself, but there’s still time for your children. More than half of those with refugee backgrounds who come to Denmark are children under 18 years of age. They can become a good investment for society, if they become educated and grow up with a sense of belonging – exactly like Danish children.

When it is claimed that integration has failed (which is far from true on many fronts), it is precisely there, where that sense of belonging has failed to be established. When youths with another ethnic background have never felt welcome and where society hasn’t been equipped to deal with the cultural differences in a sensible way.

Right now, we’re going in entirely the wrong direction. With short-term, uncertain residency permits and the constant threat of being thrown out of the country, and enflamed by negative and censorious coverage in the media which suggests that none of the young wish to be an active part of society. As with most of the other apparently smart, yet utterly short-sighted solutions we have in this world, this will leave us with expenses and problems, with no clear prospect of how to deal with them in the long term. And we simply can’t afford that – neither socially nor economically.

You read the article for free.
REFUGEES.DK depends on your support!