Members of the Danish Parliament's committee on naturalisation says they always vote No to applicants from Muslim countries. This constitutes a breach on human rights principles on discrimination and on the Danish Constitution

Recently, the new member of Danish Parliament's committee on naturalisation, Mette Thiesen from the party Nye Borgerlige wrote a Facebook status announcing that she will vote No to all applicants coming from countries "based on Muslim values." She adds: "Danish citizenship must of course not be given to foreigners and descendants from countries where we know that foreigners and their descendants far more often commit crimes than Danes, when they arrive here." 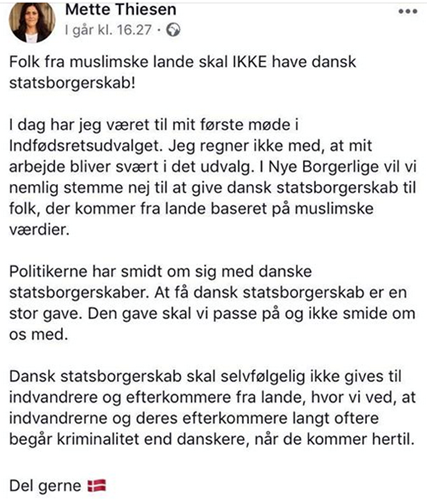 Only a few days before, you could read the following in an essay in the Danish newspaper Politiken where the German born journalist Thomas Borchert about his own struggles to obtain Danish citizenship after 36 years in Denmark: "Christian Langballe from Dansk Folkeparti, chairman of the committee until he was not re-elected for parliament this year, has explained to me that he almost always voted No if the applicant 'came from a distant, middle Eastern country'." Langballe told Borchert that he had a direct interest in bringing down the number of Muslims with Danish citizenship, that the work in the committee was in fact not about individual cases but a political fight, and that DF had succeeded in 'politicising citizenship.'

The reader might wonder why on Earth a politician must vote for or against every single application for citizenship? This happens because citizenship is given by law (a very old-fashioned and weird procedure). All applications are processed by an administrative office and divided into two stacks before being forwarded to the Parliament: The ones who fulfil the criteria will go directly on the list of cases to be voted on every 6 months. The other stack is for cases where the applicant is not able to fulfil the criteria, maybe because the person is sick or disabled, and these cases must go through the committee first, where the busy members are expected to read every single case in detail and vote for or against.

According to the UN Handicap Convention it is not acceptable to put a disabled person in a less favourable position than others. The European Convention on Human Rights primary articles say that the state must never discriminate because of for instance ethnicity or religion. Denmark has signed them both. Moreover, the Danish Constitution's article 70 says that nobody must be prevented from their political or civil rights due to her or his faith or origin.

Nobody has the right to a new citizenship, but everybody has the right to get her or his application assessed without discrimination due to things like disabilities, religion or origin, and the criteria must be the same for all. If a majority of the members of the committee agree with Langballe and Thiesen, a Muslim with disabilities is forever excluded from Danish citizenship. This is clear and illegal discrimination.

The statements from the two politicians should make all alarm bells ring in the government, and an expert council should immediately be called in to make proposals for a new and fair procedure. The Human Rights Court would probably rule that this is illegal discrimination, but as Thomas Borcherts text shows, the voting in the committee is by far not the only problem with access to Danish citizenship. Both the requirements and the administration show a total lack of legal guarantees, logic and transparency, which has become worse and worse over the years.

The leading expert on this issue, Eva Ersbøl from Danish Institute for Human Rights, has been warning about the fact that an increasing part of the inhabitants in this country do not have Danish citizenship – and thereby not full civil rights or democratic influence. The requirements have become tougher and tougher, and on average it takes longer and longer before a person can meet the requirements – if ever.

Read Eva Ersbøl's text about the procedure and the statistics for Danish citizenship here (in English).