What is it like to live in a deportation centre? This is where Syrian refugees will end up if they lose their residence permit in Denmark and do not return to Syria voluntarily

Danish authorities believe that it is safe for some refugees to go back to Syria. So far, more than a hundred Syrians have lost their residence permits, and their plight has attracted attention worldwide. We have heard about Aya who would have graduated from high school this summer and about Faeza who was training to be a nurse. The stories keep coming – about ordinary people who have worked hard to find a foothold in Denmark. The majority of them are women, a consequence of the current criteria for gaining asylum in Denmark. But what really happens to Aya, Faeza and all the others who get their residence permits revoked?

For many of them, the only real option is to be placed in a deportation centre indefinitely. They do not dare to return home. Conditions in the deportation centres have been made deliberately miserable in an attempt to force people to give up and return to their home countries. One of these centres is Kærshovedgård, outside Ikast, where singles are placed. We have taken a closer look at the centre and talked to Gerda, who supports the women living at the centre. How do you end up in a deportation centre?

Before your residence permit is revoked, or if it is not extended, you receive an e-mail calling you for an interview with the Danish Immigration Service. If the Immigrations Service decides that you should lose your residence permit, the case can be appealed to the Refugee Appeals Board, where a lawyer will assist you. If the Board upholds the Danish Immigration Service’s decision, you will lose your residence permit and will have to return to your home country. The newly established Return Agency will encourage you to sign a contract to voluntarily participate in the departure yourself. If you decline to leave voluntarily, or if it is later assessed that you have not collaborated actively, you will be sent to a deportation centre.

Denmark has made agreements with many countries to take back their citizens, even if it happens by force. However, as the Danish government does not have diplomatic relations with the Assad-regime, the Syrians cannot be forcibly returned. Those who do not travel voluntarily will therefore be placed at one of the deportation centres indefinitely.

In Denmark, there are three deportation centres: Kærshovedgård, which is located 13 kilometers outside of Ikast; Sjælsmark, which is located between Allerød and Hørsholm; and Avnstrup, which is located in Lejre Municipality. Until recently, families with children lived in Sjælsmark, which is also run by the Danish Prison and Probation Service under almost the same conditions as Kærshovedgård. As a result of pressure from the public and a very alarming psychological screening of the children, they were moved to Avnstrup, which is run by the Red Cross and is in many ways far better for the families, one of the advantages is self catering. 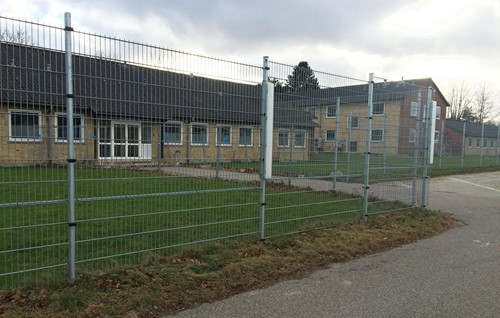 The deportation centres have one very specific purpose: to make conditions so bad that people will give up and leave Denmark. This has resulted in centres that are demonstrably making people sick – the longer they stay, the worse their mental health becomes. But in fact it does not motivate them to go home; it simply makes people go underground instead. Only a very small proportion of the residents have been deported or have travelled home voluntarily.

"The majority of those who have been enrolled in a deportation centre over time now live in another country in Europe, with or without a residence permit. That is my experience based on the many people I have been in contact with over the years," says Michala Clante Bendixen, chair of Refugees Welcome.

A small proportion of people stay in the centres for many years, despite the destructive conditions. At all three centres there are people whose situations are similar to that of the Syrians; they have had their residence permit revoked, or have never received one, but they dare not return home because they fear it will cost them their lives.

When the centre opened in 2018, Inger Støjberg, who was the Danish integration minister at the time, said that conditions must be "as intolerable as possible for people on tolerated stay. They cannot maintain a normal family life. We must have control over them, they must be at Kærshovedgård, and they must live their lives there." And since then it has only gotten worse, not only for those on Tolerated Stay, but also for the rejected asylum seekers. What is everyday life like at a deportation centre?

Kærshovedgård is a former prison, which is still run by the Danish Prison and Probation Service. It is located seven kilometres from the nearest public transport in a deserted forest. To enter the centre, you have to go through an iron gate via a lock, and the centre is surrounded by high metal fences and surveillance. Residents use electronic keys, which register their movements. The residents are required to stay at the centre, and they must appear several times a week for inspections at the Home Travel Agency. If you want to stay outside the centre for more than 24 hours at a time, you must apply for permission well in advance, and permission is only given 1-2 times each month.

As a resident you are not allowed to work, and you are not paid any financial support at all. The residents are also not allowed to cook their own food but must eat all three meals in the canteen at specific times. The centre is for single men and women, and in addition to the rejected asylum seekers, there are also people on Tolerated Stay and former convicts with an expulsion order. The canteen before Corona. Currently people must get their food and eat in their rooms.

The women live on the second floor of the main building, where, unlike the men, they have their own rooms. Gerda Abildgaard, who has been a volunteer in the women's group at Kærshovedgård since 2017, is shocked by the conditions: “In the living room there is a partially dismantled kitchen. In contrast to when Kærshovedgård was an open prison, and the inmates were allowed to cook, the residents at Kærshovedgård are not allowed to cook, stoves and other kitchen items have therefore been removed. The fridge has thankfully come back, but electrical items such as coffee makers, toasters and kettles are not allowed. There are also no plates, cups or cutlery available. All in all, it's a pretty eerie room with ugly holes where the kitchen utensils have been removed. From an acquaintance I have received a number of potted plants. The plants make the place cosier, and watering and planting them help distract some of the women.” The women's living room and kitchen
At Kærshovedgård there is room for 300 residents, currently it houses 220 men and 30-35 women. The youngest of the women is in her early twenties and the oldest around 70 years old. Gerda estimates that there are about 5-6 of the women who are mothers of young children – meaning that their children have a residence permit and live with the father. “Apart from food, accommodation and hygiene package, the women get nothing. The women who have small children at home receive a return ticket once a month. If you participate in leaving Denmark, you get some pocket money. Some of the women help clean the office corridor and for that they are given different sorts of things. Biscuits, fruit, soft drinks etc.”

There are also regular inspections of the rooms and the living room, to ensure that the residents do not have items they are not allowed. In Gerda's opinion, this has not always been done in an appropriate manner: “Previously, they came bursting in without even knocking. In my opinion, that is a violation of privacy. You don't even do that in the detention centres. So, I complained to the Ombudsman – and the case was upheld. So now they have to at least knock before entering.” 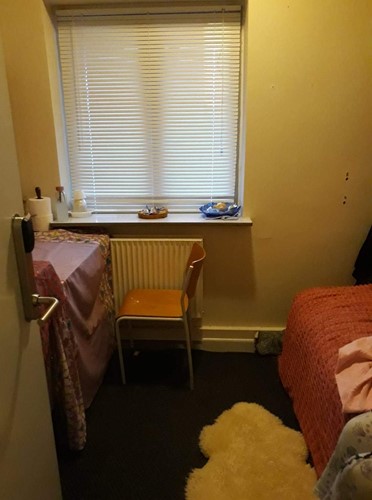 One of the women's room

The men's conditions are even worse than the women's. They live at least two in each room, and in some rooms there are four or six people living together. There is basically no common room and all of the shared spaces including the bathrooms are quite dirty. There are, furthermore, a lot of conflicts between the frustrated residents. The staff also treat the men harder than the women.

A room for two men

There are generally as few activities at the deportation centre as possible, which is yet another effort to make the stay intolerable. However, before Corona, the residents had the opportunity to participate in different classes: “They could, for example, take classes in mathematics, first aid, English and various creative subjects such as painting and handicrafts. It may come as a surprise that Danish is not taught, but the residents are not allowed to learn the language, and this is despite the fact that many of them speak fluent Danish after many years in Denmark,” Gerda explains.

Gerda has also been involved in arranging weekly activities and excursions for the women. However, during Corona, the volunteer groups who have otherwise done everything in their power to improve the daily lives of the residents at Kærshovedgård have been denied access. It has made the situation even worse and Gerda describes how the women, who were already in a very vulnerable and uncertain situation, are strongly affected:

“In the beginning, I found it very difficult to go to Kærshovedgård. I was extremely influenced by the different stories of the women. Fortunately, my husband is also involved in the work, so we can always talk about the many issues that we try to help with. We have a large network and we try our best to help where we can. But we are becoming increasingly worried now. A year of closure has left its mark. Many of the residents at Kærshovedgård have found it incredibly difficult. Some have mentally shut themselves in, others have become apathetic, and conflicts can easily escalate. This is incredibly worrying." 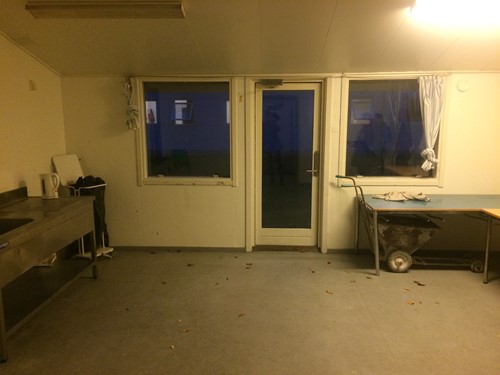 One of the shared rooms for the men

Well-founded fears and the situation in the home country

In general, you should of course leave Denmark when you do not receive asylum or when your residence permit is revoked. But it should be done on the basis of correct and fair case processing, and with respect for human rights and individual dignity. Unfortunately, the asylum assessment is a complicated affair, and the Danish system has many weak points that can lead to unfair and incorrect decisions. In addition, the Syrian cases reflect a political turn. When a bill on the very temporary asylum status article 7(3) was passed in 2015, the bar was lowered for how safe it must be in the country before people can be sent home. Now the changes in the country do not have to be fundamental and stable; with the new bill there may be only limited improvement, and conditions can still be fragile and unpredictable.

At the same time, the bar was raised for what it takes for a person to be considered as having a strong connection to Denmark. Many of the Syrians who are expected to travel home voluntarily have their entire families in Denmark – siblings, parents or adult children. Though the UNHCR disagrees strongly with its course when it comes to both security and family ties, Denmark persists in infamy as the only country in the world to withdraw residence permits for Syrian refugees

Become a member and support our work with legal counseling, information and advocacy