Convention status is the strongest form of protection, referring directly to The UN Refugee Convention. But there are also other forms of protection which will be given if a person risks death penalty, torture, or other forms of inhuman treatment, as described in the European Convention of Human Rights and UN Convention against Torture, and therefore has a need for protection on other grounds than persecution.

Earlier on, it was not very important which kind of refugee status you had. Asylum was granted for 5 or 7 years the first time, and almost automatically extended. But in 2015 the new art. 7(3) was introduced, which offers a much weaker protection than the other two. It does not give acces to family reunification for the first 3 years, it does not give free access to higher education, and you can lose it as soon as your home country becomes just a little more safe. At the same time, a law was passed making it possible to revoke a residence permit under art. 7(2) if conditions in the home country would improve slightly – no need for a stable and durable improvement, which is needed to revoke a permit under art. 7(1).

If you have been granted art. 7(2) or 7(3) you can appeal the choice of status to the Refugee Appeals Board.

Examples:
A) Political activist from Iran, a member of an illegal student organization, tortured in prison.
B) Homosexual man from Uganda, activist.
C) Young man from Syria, escaped military service.
D) Young man or woman from Eritrea, escaped from the national service and left the country illegally.

Examples:
A) Woman from Pakistan, divorced from her abusive husband after forced marriage, fled because her family plans to kill her.
B) Man from Iran, accused of adultery with a married woman, facing death penalty.
C) Female doctor from Afghanistan, spouse has been kidnapped by the Taliban, parents have received death threats.

Art. 7(3): General Temporary Protection Status
(1 year temporary residence permit, without right to apply for family reunification within the first 2 years. In general only used for Syrians).

Examples:
A) Mother with a child from Syria, fled because of the general civil war conditions in the country.
B) Man from Syria older than 42 years, not individually persecuted
C) Unaccompanied minor from Syria.

Denmark is one of the quite few countries in the world which during 38 years has had an agreeement to accept a certain number of refugees from the UNHCR. These refugees are called ‘quota refugees’ or resettlement refugees. Over 3 years, Denmark would take a quota of 1500 refugees.

In collaboration with the UNHCR, a delegation from the Danish Immigration Service and the Danish Refugee Council wille select the individual refugees, often from 2-3 different countries each year. After an interview, the refugees receive basic information about Denmark and then a visa and a 6 months residence permit is issued to each refugee.

These refugees are already recognized as refugees and do not have to go through the asylum procedure but are instead resettled directly to the Danish municipalities. Persons with special needs can be included in the quota. But Denmark now only grants a permit for 2 years and threatens to revoke it again one day, not corresponding very well with the UN description "durable solution" used in the papers of the quota refugees.

In 2016, the parliament put a temporary stop to quota refugees, and in 2018 a law was passed which cancels the annual agreement with the UN. The number of quota refugees will now be determined every year by the minister, minimum 0 and maximum 500. If many spontaneous refugees have arrived or the integration is not seen as successful, no quota refugees will be taken in. Action Aid Denmark and Amnesty have among them reached more than 128,000 signatures in a petition against the new practice. 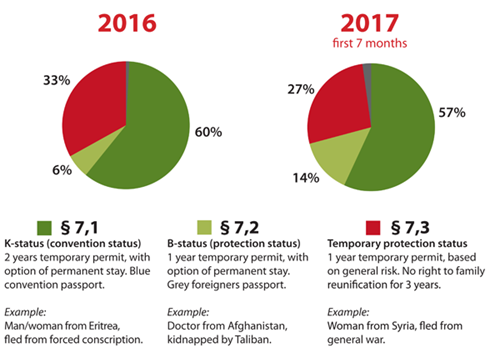