The residents in the Danish asylum centers are a motley crue, and there are many vulnerable persons among them. Amnesty International has documented that among the new arrivals in 2008 almost half had been exposed to some kind of torture. Persons who have fled from each other in their home country can be placed next door to each other in the Danish centers. Everything considered, there are surprisingly few incidents of violence and conflicts, but of course, still too many.

Women are a minority and feel insecure in the large centers among hundreds of men. Even picking up your meals in a canteen with 300 others can cost a lost of effort for a single woman. Rape takes place but is not always reported, because it might be done by countrymen, threatening the victim to keep quiet. The centers are often in isolated and remote places with long, unlit paths to walk at night, so the women are scared to leave the center and come back alone. Read more in the Focus article 'Women in an Asylum System for Men'.

Sexual minorities have a hard time in a system where rooms are shared with several others of the same sex – where do you fit in a transgender or a homosexual? They are often harrassed by the other residents, and episodes of rape and abuse have taken place. The accommodation system does not face this problem. Read more from the NGO LGBT Asylum.

Christian converts from Muslim countries can also be harassed and threatened in the centers with many Muslim men. In general, however, there are not many conflicts between Muslims and Christians in the centres (e.g. Eritreans and Syrians).

Torture victims and mentally ill cover quite a large part of the asylum seekers, and they obviously have special needs which are not getting the attention they should have. Until recently there was half of a center for persons with a special need for care in Kongelunden, with a long waiting list. Now there are only a few places with extra care in center Jelling, and for the rejected, a unit in Kærshovedgård.

Eevn in 2016, with 96 centers holding 17,200 accommodated, you will be surprised to find that there was only one half center especially for women (Kongelunden), and this was shut down in 2017. Today there is only a wing for women in center Jelling, all others risk to share corridor and bathroom with strange men. Many more women would prefer to be in a woman's center. There is also a need for many more places for vulnerable persons with a special need for care, and it seems obvious and easy to use smaller houses outside the centers, for instance for LGBT-persons. 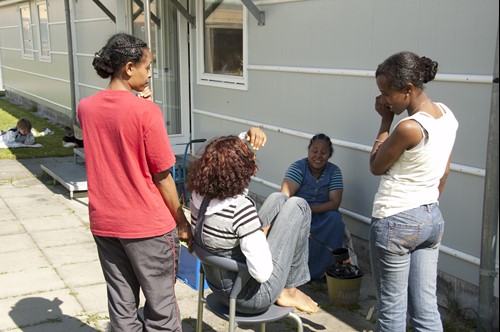 From the women's center Kongelunden around 2013