If we look at the number of refugees per capita in the world, Denmark is considerably below the other Scandinavian countries. And if we compare the countries based on their purchasing power, Denmark is at the bottom in Europe, ranking as no. 75. Denmark does not make an impressive effort, neither on the European level or the on the global scale.

In the world, there are now 70 mio people who were forced to leave their home – and of these, the vast majority are still in their home county as internally displaced. 25 mio have fled to other countries. The developing countries are carrying the main load of the world’s refugees.Only 16% are in the developed regions, and only 14% of the world's refugees came to Europe in 2018.

One third of the refugees live in the poorest countries i the world, among them are Bangladesh, Chad, DRC, Ethiopia, South Sudan, Sudan, Tanzania, Uganda and Yemen. These countries only account for 13% of the world's population and only 1.25% of the global GDP, yet they are hosting 33% of the refugee population.

10 highest in the world + Germany, Norway and Denmark 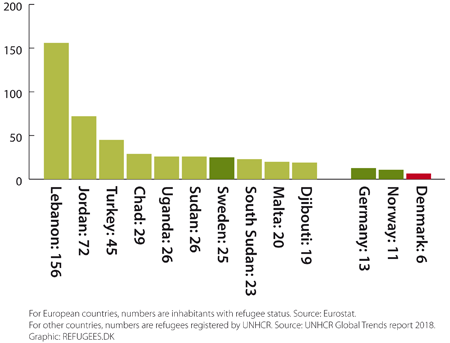 4 out of 5 refugees are in a neighbour country. Most of the Syrian refugees are in Turkey, Jordan and Lebanon, while most of the Afghan refugees are in Pakistan and Iran. Uganda is host to the majority of refugees from South Sudan. This puts an enormous pressure on countries that are already struggling with their own conflicts and feeding their own population. The global community contributes way too little to these host nations.

The figure below shows a more or less permanent population of refugees, where the Palestinian refugees are counted separately. It includes newly arrived from Syria and Myanmar, burt also generations of refugees from earlier or long lasting conflicts like Afghanistan and Somalia. Most of these people live under terrible conditions and have no right in their host countries. 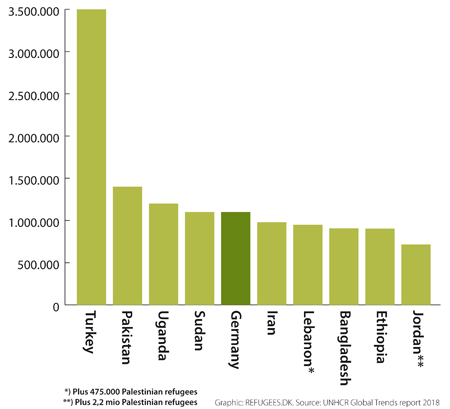 Asulum seekers is not a European phenomenon. USA and Peru are actually the two countries with the highest amount of new asylum applications in 2018. The number for USA seems high, but it is a very low number per capita: only 1 per 1,300 inhabitants, which is far less than Europe. And the amount for USA is only half of what it was a few years ago. Most asylum seekers in USA come from DRC, Mynamar and Ukraine. In Peru, with a tiny population compared to USA, hundreds of thousands of refugees from Venezuela have suddenly streemed in.