During the first three months of 2022, 70% of the applicants were granted asylum, in 2021 it was 55%. However, these numbers are somewhat misleading: the actual number for newcomers is lower if you leave out people from Syria or Eritrea who already had a residence permit as family reunified but applied for asylum later.  They are called "distant applications". In 2021, they made up for half of the positive decisions. This group used to only form a few percent of the applicants, but in 2020 they formed one quarter.

The numbers reflect more than anything else where the applicants are coming from. Almost everybody from Syria and Eritrea are granted asylum all over Europe, and very few unfounded applicants come to Denmark in general. After the high numbers of arrivals in 2015, more cases went through the Manifestly Unfounded procedure coming from Morocco, Georgia and Albania, which causes the recognition rate to drop.

However, it has also become harder for individual Iraqis, Iranians, Afghans and Somalis to obtain asylum. The same tendency can be seen all over Europe, but Denmark judges these nationalities much harder than EU on average, see further down this page. And things have even become worse since the graphs from 2020: in 2021 (until 30/9), only 3% of Afghans and 19% of Iranians were granted asylum. Read more about Afghans here. The total recognition rate for all nationalities can seem high for Denmark some years because we have few "unfounded" cases compared to many other countries.

The chance of getting permission for family reunification afterwards is also depending on which country you come from – despite that refugees do not have to meet all the criteria. This is mainly due to the demands on documents and proofs, which can be hard for many refugees to live up to. The percentage of positive decisions varied a lot for 2018, depending on country: Eritrea 36%, Somalia 37%, Syria 54%, Iran 73%, Thailand 82%. 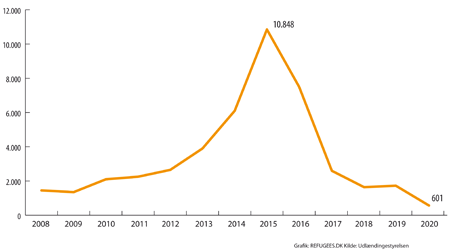 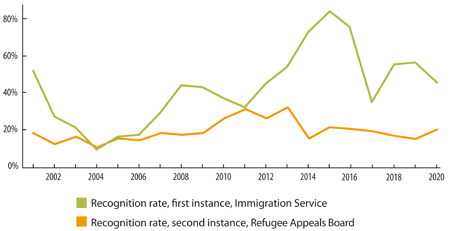 "Remote registrants" have lately represented up to a quarter of all asylum applications in Denmark – an unusually large part. This means people who already had a residence permit (most often via family reunification), and almost all of them are Syrians and Eritreans, who are sure to be granted asylum. Almiost half of those who were granted asylum in 2021 already had another kind of residence permit. This affects the statistics significantly. The rate for new arrivals is therefore much lower.

The Refugee Appeals Board (second instance) overturned 20% of the negative rulings from the Danish Immigration Service in 2020.

RECOGNITION RATES IN DENMARK AND EU 2020 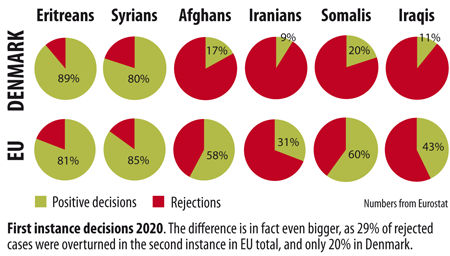 The recognition rate has been dropping in EU the last couple of years. But for some of the main nationalities, it is much harder to get asylum in Denmark than in most EU countries, as shown in the figure above. Especially Afghans, Iraqis and Somalis have had a much lower chance in Denmark than EUs average for years, including Germany and Sweden. Our neigbour countries have, however, come closer to the Danish line lately. The higher rate for Eritreans in Denmark might be explained by the fact that they are first instance decisons – other countries may grant some asylum in the second instance.

Read more: 'Asylum decisions are influenced by politics' (from 2017) 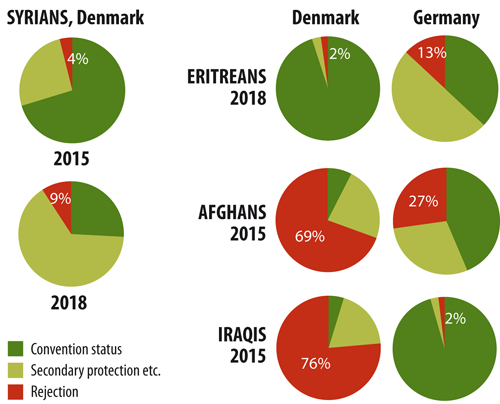 The pie charts to the left show that Denmark has changed its view on the situation in Syria. The two rows on the right show that Denmark and Germany strongly disagree on how dangerous the situation is for three of the major refugee groups. The fact that more Eritreans are rejected in Germany might be due to these being first instance decisions, as mentioned above. Germany does not return Eritreans.

Which status do you get?

Since 2015, there has been 3 different asylum statuses in Denmark: Art. 7(1), convention status, refers directly to the UN Refugee Convention. Art. 7(2), individual protection status, refers to the other human rights conventions and the ban against torture. And then there is the new art. 7(3), temporary protection against general risk. Resettlement refugees, family reunified and humanitarian permits fall under other paragraphs.

Since the weaker status 7(3) was introduced, it has been given to around one third of all refugees. It's only given to Syrians without an individual asylum motive, and it does not give access to family reunification for the first three years. More women, elderly and unaccompanied minors are given this status, proportionally.

All three statuses are, however, temporary, only given for 1-2 years at a time and can be revoked again if conditions in the home country improve. Convention status is more difficult to revoke, as this requires a stable improvement. 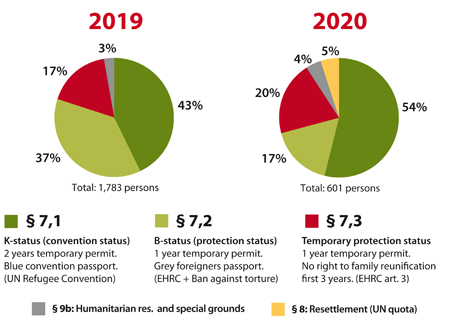