There are major differences among the European countries when it comes to refugees.

First, because of the Dublin Regulation, the countries’ geographical location in relation to the migrants’ travel routes to Europe is important – you must be registered and apply in the first country you enter. This puts the countries that form the borders of Europe in a situation where they receive too many – and these countries have no interest in doing a good job. At times, some countries do not take fingerprints on everybody, and there are countries that the others can not return people to because the reception facilities are not acceptable.

Second, some countries are considered more desirable by refugees than others – where is your family, do you speak the language, is there a fair chance of finding work, what have you heard about this country?

The third factor is about the chance of getting asylum, waiting times, accommodation while you wait etc.

Reda also How many does Denmark receive compared to the rest of Europe?

The image of the countries is not always reflecting the actual conditions in that country. For instance, Britain is high on many asylum seeker's list, but has in fact one of the hardest and most brutal asylum systems in Europe. When it comes to Denmark, everybody thinks that you must wait 3 years to apply for family reunification, though this actually only goes for one out of three, and only targets certain nationalities.

Denmark has traditionally had a high percentage of asylum seekers from dangerous countries with serious conflicts, but at the same time judged them harder than our neighbour countries. See more under What are the chances of being granted asylum? 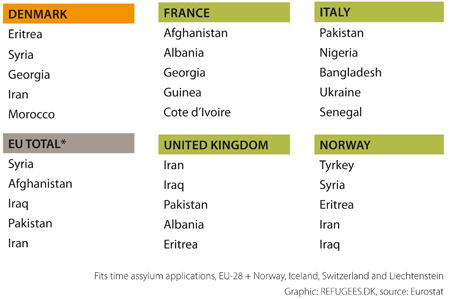 As the table above shows, there are great variation in where the different nationalities seek asylum, which to some extent has to do with language and former colony powers. The manifestly unfounded applicants take up a lot of space in some countries: you rarely have a reason to ask for protection if you come from Albania, Georgia, Ukraine or Senegal.

There are also major differences with regard to how European countries determine the same asylum case, as you can see in the graphic below, and also when it comes to the rights you will get in the country as an approved refugee.

Thus, seeking asylum in Europe is very much a lottery. Some countries, for instance Germany, receive many more unfounded asylum applications (especially from the Balkans) than others, and therefore it is not possible to compare the recognition rates without deviding them into nationalities. Read more in the articles Asylum assessments are influenced by politics and More Afghans are rejected...

It is obvious that EU needs to get a common asylum system with the same guidelines for granting asylum, more similar rights and a fair distribution agreement between the member states, like we have the distribution between municipalities in Denmark.  Unfortunately, Denmark has not been one of the speakers in favour if this, and with our special opt-outs we are not a part of the negotiations at all. 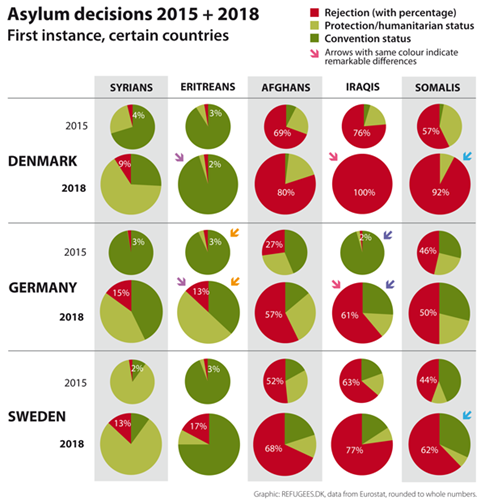