In the light of the massive focus on refugees and the constant discussion about returning them, it might come as a surprise to many, that refugees only made up 1% of all foreigners who were granted residence permit in Denmark in recent years. The municipalities only received 489 new refugees in 2020. People with asylum as their basis for residence only makes up for 1.9% of the population.

During the last 7 years, several major changes have occured in Denmark when it comes to the arrival of asylum seekers: The number peaked at the end of 2015 with 21,000 new arrivals – but dropped overnight to a very low level where it still is. Lately the system has been dominated by evacuated Afghans and displaced Ukrainians.

Adding to this, Denmark has since 2015 not accepted the 500 resettlement refugees per year from UN which we did through 38 years. During the last 7 years, only 235 quota refugees have arrived in total. 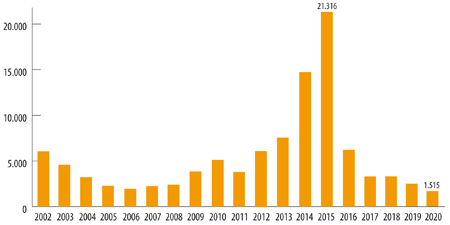 Today there are 18 asylum camps in total; the number was 98 in 2015. There are around 2,500 people accommodated in the asylum camps, out of these 700 are staying in one of the three deportation camps, and other 700 are Ukrainians.

Back in 2014-15, in the so-called refugeee crisis, the number of arrivals was unusually high during a short period. The sudden drop in Denmark was mainly due to the border control introduced by Sweden in two steps December 2015-January 2016. Denmark has always been a transit country to Sweden.

In general, the amount of asylum seekers arriving in Europe has been declining in recent years, as a consequence of the EU-Turkey deal and the increased control of EU's external borders, but is rising again. Sweden and Germany has also received fewer during recent years, but still receive 6 times more per capita than Denmark.

Usually the gross number is used, though it includes people who will never have their case processed in Denmark, and will only stay a short time in the country. From 2019 Immigration Service is not publishing the actual number of opened cases, after Dublin negotiations etc. Read more under The Dublin regulation. If all gross numbers for European countries are added together, the number will be much higher than that actual number.

Another important fact is that around one quarter of the gross number are applicants who already had a residence permit, usually as family reunified from Syria or Eritrea, which is a new phenomenon – earlier, this group only formed a few percent.

The rise that Denmark experienced 2014-2016 was even higher in other parts of Europe, and it was mainly due to new and less dangerous access routes opening up via the Greek islands and then through Balkan countries. In 2015 more than 1 mio refugees came to Europe, which is twice as much as the year before. Both the outer and the inner border controls were intensified, and the number of new arrivals has decreased all over Europe since then, but the drop was more significant in Sweden and Denmark.

The all time record was October 2015 when 3,694 new applications were filed in one month.

In total, 80,000 people got a residence permit in Denmark in 2016, but only one out of nine was a refugee. The others got permits because of work, studies or family reunification.

Where do they come from?

The profile of the applicants has changed somewhat during thye last 10 years, which affects the number of positive decisions, and a quite new phonomenon is that one in four asked for asylum even if they already had another residence permit. This is called 'remote registrations'.

The balance in nationalities applying for asylum in Denmark has changed quite a lot from 2015 to 2019. Since 2013, Syrians have made up the largest part, but over the summer of 2016 Afghans outnumbered them. In 2014, Eritreans was suddenly number two on the list, dropping to number eight in 2016, and in 2019 rising again to a shared first place with Syria – this is, however, due to the spouses who have been granted family reunification and apply for asylum afterwards.

In 2022, the top 5 nationalities are: Ukraine, Afghanistan, Syria, Eritrea, Belarus. Afghanistan has been in top 5 for many years, but had dropped out – this changed recently due to the evacuees. After 2015, fewer have come from the "classic" refugee countries, and more from a number of new countries – and fewer people from each country. A larger part fall under the procedure Manifestly Unfounded, among them applicants from Georgia and Albania.

NATIONALITIES SEEKING ASYLUM IN DENMARK 2015 AND 2020 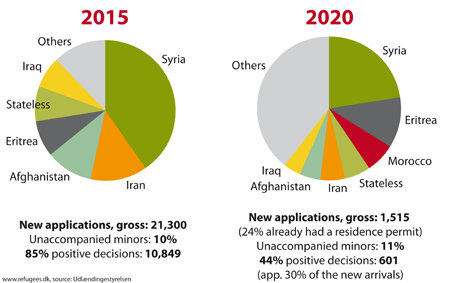 Almost everybody who ask for asylum in Denmark arrive illegally – with a smuggler or false papers. It's almost impossible to get a via to Europe if you come from countries like Syria, Eritrea or Afghanistan, so this is the only way.

The number of asylum seekers in Europe has dropped significantly due to border controls around and inside Europe, and even more for Denmark specifically. It has become very hard to reach Denmark from Greece, as people are returned to Bosnia from the Croatian border with extremely violent methods.

There are still many boat migrants sailing from Turkey to Greece each month, but relatively more arrive via Libya. It is a much more dangerous route, and many die in the desert of Sahara and drown in the Mediterranean. It is now one out of nine who drowns in the attempt to cross the Mediterranean Sea.

UNHCR has an interactive homepage where you can see the current numbers of arrivals and drowned.

The number of arrivals change every year, and usually Spain, Italy and Greece are the countries that receive the largets number. This year, 560,000 asylum applications have been regeistered in the EU until August, and on top of this comes 4.5 mio Ukrainians.

The instability and violence in Libya has led to European actors increasingly collaborating with several armed groups in Libyan on border control and the containment of migrants in camps, before they can travel across the Mediterranean. This has made the situation of migrants in Libya even more dangerous. Several have therefore attempted to travel over lesser known routes, such as Egypt and Tunisia to Italy.

Those who succeed in coming to Europe meet new obstacles. In Greece and Italy it's almost impossible to survive as a refugee, and many end up in destitution on the streets. All the way through Europe there has been put up fences and control posts, making it very difficult to reach Scandinavia. Thousand are stuck in Lesbos and Bosnia under inhuman conditions.

Read a personal story of a journey from Eritrea to Denmark: The road to freedom goes through Hell. 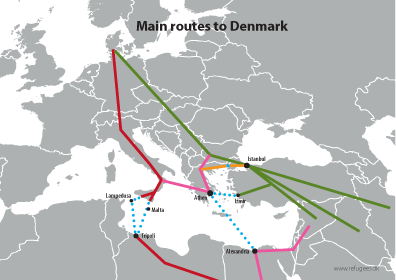