The number of asylum applications in Europe is declining, and Covid-19 restrictions led to a drop of 32% from 2019 to 2020. The UN quota resttlement system came to a complete halt.

Every time 1,000 persons seek asylum in Europe, only 2-3 of them do it in Denmark. This has been the picture for the last 6 years. Right now, the numbers are the lowest in 30 years. The Danish population represents 1 percent of Europe, and when the so-called 'refugee crisis' peeked in 2015 we received a little more than our share, namely 1.6%. Since then we have received far less than our share, calculated by population (in 2020 it was 0.28%). Besides, Denmark is among the richest and most well-run countries countries in Europe, so we could reasonably accommodate more per capita than for instance Lethuania or Rumania.

Our two neighbour countries on both sides, Sweden and Germany, have over decades been among the countries in Europe receiving an unproportionate share of refugees, and they still do it. Every time 1 asylum seeker arrives in Denmark, 6 arrive in Germany and 6 in Sweden, per capita. This makes it even more remarkable that Denmark is now at the bottom. 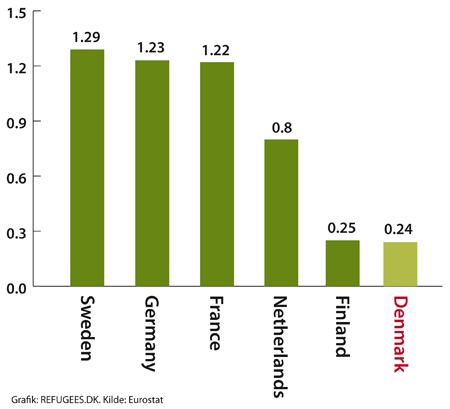 The picture below is an illustration of 'the refugee crisis'. In 2016 the largest number of residence pemots to refugees were given since 1995, and these 4 countries were among the ones who granted most per capita. Still a very limited amount of people, seen in proportion. Imagine that this is a large, Danish public school with 1,000 pupils. You come and tell the headmaster that this year, and maybe next year too, 1-2 new pupils will arrive. They will need a little extra help with the language and getting settled. Do you think the headmaster would start talking about a threat to the future and the culture of the school, and decide a total stop for new pupils on indefinite time? 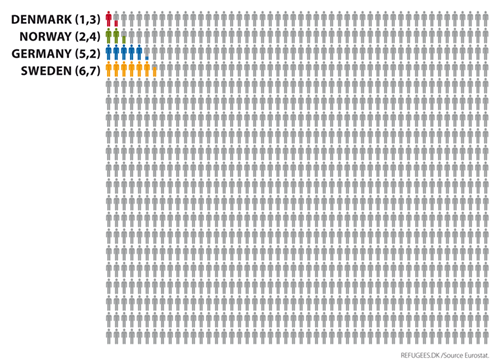 The number of asylum seekers in Denmark has followed the tendency in Europe as a whole, nonregarding shifting governemnts and policies, as you see form the graphic below. The sudden drop seen in new arrivals to Denmark happened in December 2015 and was a direct consequence of the Swedish border control. Shortly after, there was drop for all of Europe, following the EU-Turkey deal and the intensified control of the outer borders. However, the numbers for Denmark has remained very low compared to the rest of EU, even after the border control to Sweden was loosened up. This is probably due to a combination of the bad image that Denmark has built up and the fact that many choose to stay in France or Germany now in stead f continuing towards Sweden.

Whether a country receives many asylum seekers is also linked to the country’s geographical location and how consistently the country takes fingerprints and registers arrivals (e.g. Italy and Greece) and does not necessarily reflect where the asylum seekers wish to claim asylum. For example, many asylum seekers have ended up making their asylum claim in Denmark even though they were on their way to Sweden – and even more travelled through the country without being registered.

The total number of applications (gross number) in Europe is higher than the actual number, as many are registered in more than one country. Around one quarter of all asylum seekers in Denmark are returned to other countries because of fingerprints or visa (Dublin procedure), but we also receive some from other countries. 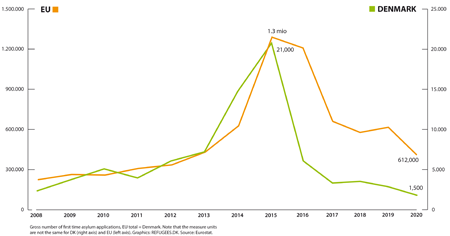 The figure below shows that Denmark gets a small amount in a European context. The amount of arrivals caused a shock effect in this country, but was next to nothing when you see it compared to our enighbour countries, Sweden and Germany. The figure also shows that the rise in Germany topped after numbers had dropped in Sweden, Denmark and Holland. France is the only one of the shown countries where the curve has been stable and is still rising. 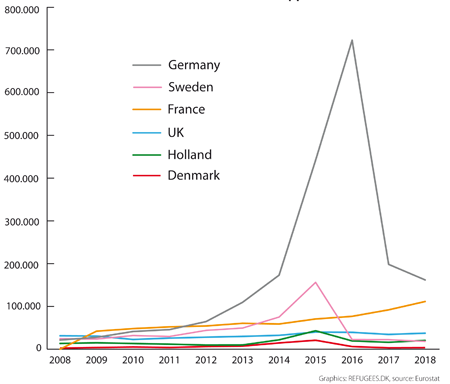